The Irish Times view on the killing of Jamal Khashoggi: time to stand up to Saudi Arabia 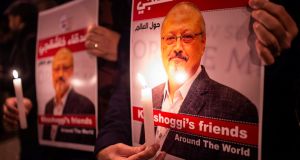 The brutal murder of Jamal Khashoggi has galvanised world opinion against the medieval autocracy in Riyadh, exposing the fatal pact between the west and the House of Saud. Photograph: Yasin Akgul/AFP/Getty Images

The brutal murder of Jamal Khashoggi has done what decades of beheadings, the killing and starvation of civilians on a large scale in Yemen, the oppression of women and the sponsorship of terrorism all failed to do. It has galvanised world opinion against the medieval autocracy in Riyadh, exposing the fatal pact between the West and the House of Saud and creating the biggest crisis for the regime since 9/11.

How the world responds to Khashoggi’s death matters a great deal. Since the journalist vanished after entering the Saudi consulate in Istanbul earlier this month, Turkish president Recep Tayyip Erdogan has been turning the screw on the Saudi leadership by gradually releasing more information on the killing. The Trump administration has shifted its stance over the month, at one point appearing to accept Riyadh’s laughable claim that the killing was the work of rogue operatives but more recently warning of sanctions.

The concern is that both Ankara and Washington are only interested in pushing the regime to a point where they can extract concessions in return for easing the pressure. The position of crown prince Mohammed bin Salman, who is suspected of ordering the murder, is increasingly untenable; if the US and Turkey were to save him now, he would be all the more loyal to them.

If that’s the strategy, it’s more than a cop-out. It’s complicity. For too long the West, led by the US and the UK, have abased themselves before the tyrants in Riyadh. In exchange for turning a blind eye to its atrocities, the West has gained an intelligence partner on Islamist terror networks and a loyal buyer of expensive weapons. It has left the West in a moral morass, one that Khashoggi’s killing should prompt it to clamber out of. So far only Germany has taken a serious step in that direction, by announcing the suspension of its (modest) arms sales to the kingdom.

The removal of the crown prince as de facto leader should be the West’s first demand. Those responsible for the killing, including those who ordered it, must be brought to justice. More fundamentally, however, the West must stand up to Riyadh and make clear that human rights violations will no longer go unpunished.

Ireland has little geopolitical clout, but that is no excuse not to act. Minister for Foreign Affairs Simon Coveney’s response to far has been weak, recalling the Government’s tepid expression of “regret” at Saudi Arabia’s mass execution of 47 people in 2016 and then taoiseach Enda Kenny’s failure even to raise human rights concerns during a trade mission in 2014. Coveney should make clear Dublin will not solicit Saudi support in its campaign for a seat on the UN Security Council.

Dublin has little or no leverage over Riyadh, but if the Government’s so-called values-based foreign policy is anything more than a meaningless slogan, it should make its voice heard.

1 Coronavirus: Non-essential travel from US set to be banned within days
2 ‘Our hearts are broken’ – implications of fresh lockdown sink in
3 Are we really facing the death of the office?
4 Coronavirus: No additional deaths in State but 68 new cases
5 Portlaoise locked down: ‘Our older clientele haven’t been back’
Real news has value SUBSCRIBE