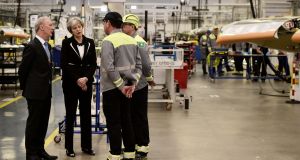 British prime minister Theresa May during a visit to the Bombardier plant in Belfast last year. Look at the market for aircraft parts and maintenance and you realise, yet again, the nonsense surrounding the free-trade delusions of the Brexiteers. Photograph: Reuters

Bombardier has put its Belfast plant up for sale, in the process putting a question mark against the 3,600 jobs in the North’s largest private-sector employer. It is difficult to know the extent to which Brexit influenced the Bombardier decision – the company said it didn’t. But it is certainly a vital factor in the efforts to find a new owner.

Airbus, the company’s main customer and one of only a few prospective buyers, has warned repeatedly about the risks of a no-deal Brexit and how it would force the company to make decisions to cut future investment in the UK.

Look at the market for aircraft parts and maintenance and you realise, yet again, the nonsense surrounding the free-trade delusions of the Brexiteers. Their case is that the UK can set its own standards and rules after Brexit and sail off to do profitable trade deals around the world. While still retaining access to EU markets.

This all takes place in the EU single market and so it is seamless – no bureaucracy and no delays. The Beluga opens its giant snout, and the wings enter in Wales and exit in France

The aviation industry shows how this is simply impossible. It is where the fantasy world of the Brexiteers meets the reality of a big UK industry deeply embedded in the EU economy and its regulatory processes and operating freely across Borders. It is where bluff and bluster meets thousands of pages of regulation, years of custom and practice and a web of international research funding and co-operation. And there is only one winner.

An Airbus A300-600ST, known as the Beluga – after the whale – lands regularly at the company’s plant in Broughton in north Wales to bring wings and other components manufactured there to its base in Toulouse. This all takes place in the EU single market and so it is seamless – no bureaucracy and no delays. The Beluga opens its giant snout, and the wings enter in Wales and exit in France.

After Brexit, no-one knows whether such frictionless trade can continue.If the UK leaves under a withdrawal agreement, then it will continue up to the end of 2020 at least. If the UK crashes out in a no-deal, the indications are that the EU may give a nine month leeway in terms of regulatory compliance – meaning it will continue to accept UK regulation in some areas for a period.

Big manufacturers have been forced to apply for EU regulation and will in some cases require new EU bases. And as well as this uncertainty, there is the risk of new bureaucracy and delays.

Last year Airbus took a majority stake in the Bombardier C-series aircraft, for which the plant in Belfast manufactures wings using an advanced technology. It was seen as good news for Belfast. But while Airbus has acknowledged the Belfast plant as a “ key supplier”, it is not clear yet whether it will step in and seek to buy the plant.

This will all depend on its post-Brexit strategy for the UK. And with the risk of a no-deal Brexit in the autumn still very much on the table, huge uncertainty remains about the terms on which the UK industry will trade with the EU, the availability of future EU research funding and how the industry will be regulated.The aviation parts industry has its own specific peculiarities, but the story is repeated across the board. You can’t put Humpty Dumpty together again after a no-deal Brexit.

Let’s hope the Bombardier story works out and a buyer is found, for the sake of Belfast, the direct employees and those working in supply industries across the island. Some clarity on the UK’s exit plan would help, of course, but this still looks elusive, with mixed signals emerging from talks between the Conservatives and Labour to try to find a way forward. And even if a deal does emerge, whether it could get support in the House of Commons remains open to question. More time wasted over the summer and a fresh panic ahead of another deadline at the end of October remains a real possibility.

We’ve all learned a lot about borders as Brexit has rolled on. Trade experts and businesses themselves have been shouting since the Brexit referendum about just how complicated and deep the EU single market is – and how breaking the links even over a prolonged period will be costly and difficult. Trying to reintroduce trade borders overnight would be lunacy.

What has happened in aviation and aerospace is instructive. The UK has indicated that post-Brexit it wants to remain part of – or closely aligned to – the EU regulatory regime, meaning it will accept EU rules.

It wants to remain – effectively – part of the single market for this sector and is willing to play by the rules. Whether the EU would agree, if future negotiations do get under way, remains to be seen.

The story differs a bit from sector to sector across the UK economy, but the bottom line is the same. If you want access to the EU market on something like exiting terms, then you have to keep playing by the rules.

The DUP will surely have recognised this, but still seems to reckon that following a different regime to the UK – and taking rules from the EU – must be resisted, despite the threat to jobs.

The point of following rules set by someone else clearly has a political importance , though if Brexit shows us anything it is that the opportunities for economy autarky in today’s world are small indeed.

Bombardier would be an easier sale if the North had committed to remain aligned to EU customs and regulatory rules post Brexit, as envisaged under the backstop plan in the withdrawal agreement. It illustrates clearly the choice faced by the North’s politicians. In today’s international economy, trying to write your own rules comes at a hefty cost.