Cliff Taylor: Anything which might upset people being cynically parked by Government

The property tax joins the carbon tax in the long grass 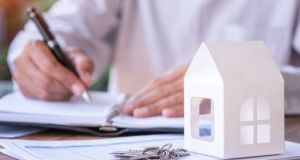 Few taxes can have been the subject of more reports and analysis than the local property tax. Photograph: Getty Images

The Government’s indecision is final. After a year-long review process it has put off agreeing on what to do next with the local property tax until well into next year – and almost certainly beyond the next general election.

We need yet more consultations and cross-party consensus in the collective that the Dáil has become. The same script is being followed for the carbon tax.

If this is the way it is going to be we would be better to have a general election, though some clarity on Brexit would be essential before this happened.

Yet even in the shadow of Brexit the normal business of government needs to go on – and this involves making the odd decision.

Few taxes can have been the subject of more reports and analysis than the local property tax (LPT).

A decision had been expected around the time of the budget, but the report never appeared – and nor did any decision

The game of delay was started in 2015, a year before the first revaluations were due to happen, when then finance minister Michael Noonan commissioned former senior public servant Dr Don Thornhill to do a report.

The problem was that house prices had gone up since the tax was introduced in 2013, and home-owners would have faced higher bills. More than 50 submissions were received as part of a consultation process, and a lengthy report produced.

In the Department of Finance report published this week the officials said that the government of the day “in line with one of of his [Thornhill’s] recommendations agreed to postpone the revaluation date for the LPT from November 2016 to November 1st, 2019.”

This is a misrepresentation. The Thornhill report said that delay might be needed, but only to give time to put a reformed system in place.

It stated that “a simple decision to freeze valuations at 2013 levels without accompanying policy and legal changes would be inequitable and open to legal challenges, and is not recommended”.

Yet this is what happened – and what has now happened again.

The latest decision follows another report and another public consultation which was completed almost a year ago. The Parliamentary Budget Office and the Oireachtas Budget Oversight Committee have both looked at the issue in detail.

A decision had been expected around the time of the budget, but the report never appeared – and nor did any decision. Now we are, according to Minister for Finance Paschal Donohoe, to have yet more “consultations”.

This is code for saying that the Government, after months of delay, is kicking this one into the long grass because it is not prepared to make a decision.

The problem is that it has already been left so long that any move to try to protect revenue and restore current prices as the base for the tax will lead to increases for some groups.

But the longer this is put off, the harder it is to fix. Delay prolongs the obvious inequity where large numbers who have bought new houses since 2013 – and any first-time buyers in 2013 itself– pay nothing, and are effectively free-riding at the expense of those who pay.

The tax amount is now losing any relationship to its intended base – house valuations – and is turning into a quasi-fixed annual charge. Its importance is declining as other taxes increase. It could well be open to legal challenge. So much for broadening the tax base.

Since the recent publication of the Oireachtas committee report on the issue – calling for a rise from €20 a tonne to €80 a tonne by 2030 in the carbon tax – the Government has fallen over itself to avoiding saying what it will do.

The latest ruse is to say it also wants cross-party agreement on the mechanism to give the cash raised back to the public – whether via specific environmental measures, tax credits or cheques in people’s letter boxes.

Having ducked a decision to increase carbon tax in last October’s budget, the Government is not even confirming that it will push up the tax at all in the 2020 budget.

Carbon tax is not the magic solution to our emissions problem, but all the experts agree that it is part of the necessary mix to change people’s behaviour. And remember the ESRI has warned a much higher carbon tax level is needed.

Like the property tax, anything which might upset people or give oxygen to the Opposition parties is being cynically parked.

Nor would it give you any confidence that the Government is willing to push ahead with the even more difficult reforms needed to address the housing and healthcare problems we face.

There is no doubt that the water charges controversy has changed our politics. They also increasingly reflect wariness of the populism common in politics elsewhere.

The gillet jaunes movement was sparked in part by higher fuel prices and wider demands for a fairer tax system. Ironically, here the conventional wisdom is that the local property tax was introduced in 2012/13 at a time when the public mood was so low and concern about the future so great that it became accepted.

Ever since the cry has gone up whenever a new charge is proposed or an existing one might rise even a bit: “ this could be the next water charges”.

But somehow governments still need to find a way to make decisions. Every can can’t be kicked down the road.

1 David McWilliams: ‘Ireland is three decisions away from being a perfect country’
2 US passengers fly into Dublin: ‘I’m here for six days. I guess I’ll have to stay inside’
3 Travel rules unlikely to include mandatory quarantine or cancelled flights
4 California shuts down again as US coronavirus cases surge
5 Covid-19: 200 to 250 people arriving in Ireland from US daily - Coveney
Real news has value SUBSCRIBE