Cycling the Border: ‘Abundant beauty lies in either country on this Emerald Isle’ 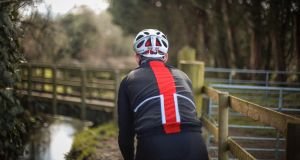 Daniel Stewart: ‘Sitting in wonder of my exploration, I’m still scared of Brexit, its effect on the farmers, the B&Bs, and the average man on the street. But now I’ve seen it all, I know what to reminisce.’ Photograph: Lily Duffield

In a dinky hotel, in a cosy bed, I wake up. Opposite Portaferry’s dock, joints crack and muscles sigh. Today, is the last day.

The last day of mountains, stretching from Derry to Tyrone; and across Down’s ridges and cracks. The last day of absorbing the Northern Ireland as I know it: free to roam, free to explore; abundant beauty lies within either country on this Emerald Isle.

It’s the line on a map and that’s it.

Three days ago, heading seven hours south, from Portstewart to Pettigo, this day was the day. I sat there, with gusts on my face catapulting me back, telling myself the last day would be the day: when I head north, back to my home, a hurtling tailwind will guide me, an average speed will make me proud.

Heading down to breakfast, the conservatory dining area gives a rainfall applause. Splish and splash match the waves which crash; but still – coffee goes down with a smile. All that is to be done is a headwind start around the Peninsula’s southerly hook. A tailwind will take care of the rest. Home will be back in a heartbeat.

Breakfast gone, panniers on, I’m out to face the elements. Clopping down crooked hotel steps, I hit the road. Already soaked, the machine generator needs warming up and firing. Quads and calves squeeze to make the bike flex. Alarmed, I look at the speed: 25mph (40km/h), 30mph (48km/h) . . . I’ve got a tailwind, but we’re not north yet!

Sirens would blare, but my body is gone. Woozy groans echo from aching bones: I lived on these roads in my teenage years. Running from girls, exams, frustrations, fears; the Ards Peninsula was my home. I knew the way of the wind like the back of my hand: a northwesterly wind was a blue moon event – an unfortunate one.

A good mood, a distant memory, I reside to a long ride’s plug. Only a short 50 miles (80km) today, but it will take the longest. Wind and rain pile on thick, the coast road travelling unflinchingly north, towards Belfast suburbs, and home. I think of nothing else but getting there. In my head: no people lie, all problems die. I’m just following the dripping, white line of the long, straight road.

At Bangor, I chose the carriageway through Cultra. The generic wide road never appeals cutting through Holywood with no apologies; but a downhill gradient is an involuntary choice. Drained, my mind is weak: everything flushes, getting home is the only game worth playing.

Rolling down the suburban street, I open the gate, the journey ends.

Four-hundred-and-fifteen miles (668km) travelled, nearly 22,000 calories burnt. My teddy-bear watchdog shepherds me in. His thick, warm fur, a fuzzy welcome to an empty home. He doesn’t care what I’ve done, he just wants his belly scratched.

Fingers tickle the curls on his chest. I transcend to a place of pride. Not just for finishing a challenge unscathed and unharmed, but a pride of seeing my homeland, in what it is now, and what is was then. I mediated a journey across a mystic border, enjoying hospitality from all corners of our land. Not once was I unsafe, but not once was I unlucky: I have grown up in a better place to call home.

Sitting in wonder of my exploration, I’m still scared of Brexit, its effect on the farmers, the B&Bs, and the average man on the street. But now I’ve seen it all, I know what to reminisce.

They can decide to close it up, and I will smile at the colours that I saw, bleeding out from my beloved Emerald Isle.

‘I felt safe in Korea. Returning home felt like a gamble’
8