Cliff Taylor: the notion of ‘pensions parity’ in the public service is irresponsible

It is nonsense that all future public servants should benefit from a very generous pension scheme which 200,000 of its members already have 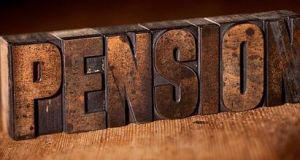 While public sector pensions have been protected, those for many private sector employees have been savaged. Some kind of new balance is needed. Photograph: Getty Images

A lot of debate comes down to how an argument is framed. Public pay demands since the crisis have been based on the theme of restoration, for example, taking the pre-2008 position as the baseline – a kind of entitlement to be attained before actual increases are considered.

And so the joint position by the teachers’ unions this week looking for a review of the pension entitlements of staff hired since 2013 was couched as part of the other great post-crisis battle – demands for equality between newly-hired and more established staff.

Newer staff, who are on a different scheme with lower benefits, were facing a “substantial deterioration” in their pension position, the unions said. Parity had to be put on the agenda for all public pension holders.

Perhaps we will see other public service unions add their voice here as the conference season continues. But they should keep their heads down on this one.

Unless, of course, the unions mean that the parity could be achieved by reducing the entitlements of the pre-2013 group

The pension entitlements of the pre-2013 generation are generous – very generous – and that is counting in the extra contribution they now pay. To suggest that some or all of these entitlements – completely out-of-kilter with the private sector – be reintroduced for new public servants is crazy.The State cannot afford it, and taxpayers should not be asked to fund it.

The realpolitik of the situation during the crisis meant that it was easier for the government to hit people who had yet to be employed a bit harder, as opposed to those already in work. Of course, all public servants suffered pay cuts and some changes in terms and conditions – but newer recruits were hit harder.

Restoring pay parity for younger employees seems fair – this group is more likely to be caught with higher housing and childcare bills. There is now a row about whether a deal done last year goes far enough in restoring parity – and with a general election in the air over the next year or so, the unions will push this as hard as they can, along with preparing for wider pay demands.

But opening up the pensions issue would be a new front – and one which would go to the heart of the public sector reform process.

The old scheme, which applies to those hired before 2013, offers those on full 40-year service a pension equal to 50 per cent of final salary, index linked to future public pay increases and with a tax-free lump sum of 1½ times annual salary on retirement.

So someone on around €66,000 with full service would get a tax-free lump sum of around €100,000 on departure, and then a generous pension entitlement. This has generally been an unfunded pay-as-you scheme, though some groups, including teachers, have paid contributions. It is, on any calculation, an extraordinary perk.

The scheme has been building up significant liabilities for the State – around €114 billion by the end of 2015, equivalent to more than half the national debt. So during the crisis, to make public sector pensions more affordable, two things happened.

First, a new scheme was created, the so-called single scheme, which pared back the entitlements for those joining after January 1st, 2013. Pensions for newer entrants are based on career average earnings, and are index-linked based on inflation rather than tied to public sector wage rises.

The Government has responded with plans for automatic enrolments

Second, a pension-related deduction was introduced for public servants as one of the crisis measures, and this was subsequently transformed – in slightly less onerous form – into an ongoing additional contribution to their pension (the so-called ACS).

This has left pre-2013 public servants with a sweet deal despite the fact they are paying a bit more. The civil service pension scheme website, for example, calculates that to buy the benefits available to a higher executive officer on retirement would require someone in the private sector to have a pension pot of €690,000, while for a principal officer the sum rises to €1.34 million.

To suggest that some kind of “pensions parity” should be achieved by restoring some or all of these benefits for those taken on since 2013 – and the thousands who will be employed in future – is irresponsible.

Unless, of course, the unions mean that the parity could be achieved by reducing the entitlements of the pre-2013 group. A tax on the lump-sum payments maybe? Or a recognition that people getting pension rises based in part on productivity deals done with those still in work is crazy?

The public sector pay commission took a look at the figures in its 2017 report. It calculated that for the pre-2013 group, pensions were worth 23 per cent to 25 per cent of salary, 13-14 per cent more than what was available in an equivalent private sector scheme. In contrast, the benefits for the post-2013 recruits were seen to be roughly equivalent to the private sector.

There is a huge problem with pensions – and younger employees are particularly in the firing line. But this problem is not in the public sector, it is in the private sector.

The Government has responded with plans for automatic enrolments. There is a real issue here in terms of many people not being in schemes at all – and the huge uncertainty that many in the current generation working in the private sector face in their retirement income.

While public sector pensions have been protected, those for many private sector employees have been savaged. Some kind of new balance is needed. This is where the unions should be concentrating their energy rather than putting forward the nonsense that all future public servants should benefit from a scheme which 200,000-plus of its members are lucky to have got into before the shutters came down.

You simply can’t credibly make a case that, based on parity, all new public servants should also get a golden pension ticket.

5 Hybrids? Plug-ins? Everything you need to know about electric cars