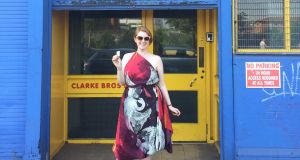 Barbara Whearty at the Cuan building in Cromac Street, Belfast. She and husband John-Paul have transformed it from a clutch repair workshop to a coffee shop and event space

“Utter disbelief. I could not understand the mentality that drove it. It’s like biting off the hand that feeds you. Why would people want to be so isolated?”

“It’s hard to know. There is so much uncertainty. Some of our suppliers have concerns about their supply chain, which could impact us. Nobody knows what is happening, so nobody can truly prepare. If our customers tighten their belts, treats like coffee and sandwiches are the first things to go.

“In the building we also host florist Dillon McDonnell, the Dandylion Floral, and Michael Morris, the Bearded Candlemaker. Dillon imports from Holland and he has already had delays because of unrest in France. ”

“Quite a lot of our supply chain for use in the cafe – meat and milk – comes from across the Border. We are in the ‘just in time’ model. If there were any delays at all we wouldn’t have the produce to make our food and drinks and service our customers. In that scenario business would stop dead.”

When did you begin preparing for Brexit, and what contingency plans have you put in place so far?

“There is nothing we can do. We have no safety set. We have had discussions about it, but the overwhelming tone of conversations is ‘nobody knows’.”

Are you examining new markets/suppliers and if so how practical is that?

“No. It’s not practical. We have great relationships with our suppliers. For example, Orchard Smokehouse, based in Armagh, were the only ones we found with the quality we wanted so changing isn’t in our heads.

“We are selling food from our cafe on the edge of the city centre in south Belfast, so there is no option for new markets.”

“It’s hard to know what Brexit might bring. If I looked for a silver lining it could mean having to do more ourselves, so we could look at roasting our own coffee or producing our own meat. For example, Dillon is beginning the process of growing his own flowers in Co Down.”

“Best case would be for us to stay in the EU. If that is not viable then a withdrawal agreement that protected the Border in Ireland. Worst case is no-deal crash out. I can’t even wrap my head around what that would mean, but I am concerned it would kill our business.”

“In the cafe and for the fresh flowers we can’t, but Michael can for his sundries, like tins and wicks, and wax can be stockpiled and he has increased that in recent weeks. He had hoped to export to the States this year with his Irish collection of candles, but for now it’s about stabilising his business.”

How might the Irish or British governments or the EU help ease the pain of Brexit for your company or sector?

“Make this madness stop. This perpetual motion on the same points is just draining the life out of the economy. Everyone is paralysed, nobody wants to invest.”

How do you think the governments have handled the Brexit negotiations?

“The Irish Government has shown itself to be the adult in the room. The British government has come across as the toddler who cannot be reasoned with. Logic doesn’t appear to apply. The patience shown by Ireland and the wider EU has been breathtaking. I wonder if they would have been so patient if Ireland wasn’t so threatened by Brexit.”

“Impossible to say because we have no idea what form it will take. I don’t have a secure vision of the future. All I can hope is that sanity prevails. Our building has three floors, and we have plans for a digital co-working space and a post-production house for TV and film. But until we can stabilise everything then that’s on hold. Right now it is about survival.”

“I would have said yes about a month ago but now the only way forward I can see is a general election. If we are talking about the application of democracy then a minority government forcing a deal through based on a three-year-old referendum is definitely a grey area.”