Christianity must forge a new alliance with deprived and marginalised people

Rite & Reason: Pope Francis’s visit to the Capuchin Centre was him doing what he does best 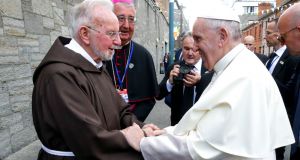 My father died when I was five. Yet I found myself thinking of him often during the visit of Pope Francis. He once told me: “Those who like you from the start will probably always like you. Those who dislike you from the beginning will never like you anyway.”

In assessing the impact of the papal visit we need to be mindful of different audiences. To a significant swathe of Catholics who were distressed, even traumatised, by the outcome of the recent referendum on the Eight Amendment, following hot on the heels of the same-sex marriage referendum, the visitation was a major boost.

On the other hand many who are sympathetic to the views of Mary McAleese that the Catholic Church is not a hospitable home for women and members of the gay community will not have changed their opinions. Indeed some people, like the journalist Ursula Halligan, appear even more disillusioned.

The papal visit was a forceful reminder that the scars from the scandals about child abuse are difficult to heal. The revelations 10 days before the visit about the Catholic Church’s failings in Pennsylvania evoked painful and sinister memories of identical deficiencies in Ireland.

It did not help that a new controversy emerged during his short time in Ireland when the former chief Vatican diplomat in the US, Archbishop Carlo Maria Vigano, threw a new grenade into the mix.

He called for the resignation of Pope Francis and accused him of covering up the sexual abuses of Cardinal McCarrick, a leading figure in the American Church. Francis’s response to invite people to make up their own minds did little to abate the situation.

Pope Francis spoke a number of times with great sincerity about his sorrow for the abuses. He appeared genuinely moved by his private meeting with abuse survivors even though it was very surprising that he appeared to have been so poorly briefed about the specifics of the situation in Ireland such as the Magdalene laundries and the Tuam graves.

Yet, as my late father often said, “talk is cheap”. The real litmus test of the success or otherwise of the visit will be if there any practical steps taken to address the atrocities perpetrated on vulnerable people, generally women, and innocent children.

Equally damning has been the institutional Church’s cover-ups of these crimes. There is no moral ambiguity here. Keeping aloof ultimately involves complicity. In the final analysis the Church will be judged by its capacity to live up to the Gospel imperative: “By their fruits you shall know them.” (Matthew 7:20)

One of the most striking things about the event in the pope’s honour at Dublin Castle was that it was the Taoiseach Leo Varadkar rather than Francis who spoke of the need for a “new covenant”.

We got a glimpse of what that might look like in the pope’s visit to meet Br Kevin Crowley in the Capuchin Centre. Here we saw Francis doing what he does best: reaching out to the least, the last and the lost in a very personal way. For a brief time the clouds were lifted.

There is a striking lesson here for the Irish Church. It strikes a chord with people not when it is pontificating from on high, but when it reaches out to those in need as Jesus did.

Pope Francis is a master of symbol. In the Capuchin Centre he challenged his flock with a message that a Christianity that is audible without being visible is a counter-sacrament.

Moreover, if our Christianity is to regain its credibility it must forge a new alliance with the deprived and marginalised. It must be bold enough to be baptised in the Jordan of the real state of Irish religion and courageous enough to be crucified on the cross of Irish homelessness, abuse and social exclusion.

Were that to happen the papal visit will have been the catalyst for Christians to imitate the suffering Jesus, who continues to tiptoe in disguise to the dark corners of Irish society today in the many faces of the bruised, battered and the broken, whispering in a tender voice: “Love one another as I have loved you.”