Press freedom cannot be taken for granted in Ireland

As world swings disturbingly towards fascism, brave journalism and scrutiny are vital 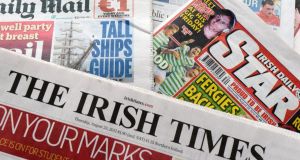 The press must continue to expose wrongdoing and hold the powerful to account, with honest, professional, brave and tenacious journalism. Photograph: Alan Betson

There’s a real risk when you’re writing an article for a newspaper in a stable western democracy and mention “freedom of the press” and “journalism matters” that you’ve lost your audience before you’ve begun.

Who wants to read about it? Isn’t that the self-serving stuff we’ve been hearing from journalists and media organisations for years, declaiming their role as a cornerstone of democracy?

Who cares when despite the inadequacies and inequalities of Ireland today, it is a fundamentally decent country where we can live in peace, safety and, relative to much of the world, prosperity? Where we can elect the politicians we want (even if many of them wear indistinguishable political clothes) and remove them when they don’t deliver; where we can trust the Garda to protect us, despite deep fault-lines, and where we can be educated and prosper and grow in a society still rooted in values we can be proud of.

In these circumstances, in our healthy democracy with all its faults, why should we care about the freedom of the press? And does journalism really matter?

As chairman of NewsBrands Ireland, the representative body for national newspapers – print and online – I would, of course, be expected to answer yes, and yes.

Especially today, the start of Journalism Matters Week, where the country’s newspapers unite to highlight the vital role the press plays in a vibrant democracy and call on the Government to support measures to ensure the industry’s survival. But leaving that aside for the moment and parking the reference to the survival of the Irish newspaper industry, let’s look at the issue of the freedom of the press and whether journalism matters from a different perspective. The perspective of 2018 as opposed to just a short few years ago.

As demagogues, dictators and the corrupt everywhere know, journalism really does matter – so they deal with it by whatever means necessary

When Bergen-Belsen concentration camp survivor Tomi Reichental was awarded a Rehab People of the Year Award in Dublin just four years ago for his work with Irish schools to ensure the memories of the Holocaust would never be forgotten, it was inconceivable that the world would see a Nazi revival in our lifetime, if ever again.

But the unthinkable of 2014 has become a 2018 reality, with the far-right marching once again in Germany and running in elections; as a fascism resurfaces through Europe, threatening the very foundations of many democracies we have taken for granted.

And as Fintan O’Toole wrote in these pages recently, fascism doesn’t arise suddenly in an existing democracy. It has to be methodically nurtured, boundaries have to be pushed, acceptable norms tested, “enemies of the people” and “fake news” created, to systematically undermine and usurp the pillars of democratic freedom that stand in its way.

One of the most inconvenient of those pillars has always been a free press, because as demagogues, dictators and the corrupt everywhere know, journalism really does matter – so they deal with it by whatever means necessary.

Cracking down on a free press is nothing new, but this year’s World Press Freedom Index paints a worrying picture: “Hostility towards the media from political leaders is no longer limited to authoritarian countries . . . more and more democratically elected leaders no longer see the media as part of democracy’s essential underpinning, but as an adversary to which they openly display their aversion.”

So far in this country we’ve been fortunate that the role of the media as a cornerstone of democracy, as the probing and challenging voice of society, remains strong.

But as unlikely as it might appear that this could change anytime soon, it would be a mistake to take it for granted. Because the continued existence of a robust Irish media is under significant threat from several quarters.

This is the reason for Journalism Matters Week; to highlight the role of a vibrant press and to call on the government to support key measures being sought by the industry to ensure its future. In return we will continue to expose wrongdoing and hold the powerful to account, with the honest, professional, brave and tenacious journalism that has served this country, this democracy, well.

We need the Government to follow the example of their counterparts in other EU countries and support the industry and the journalism it produces:

– Appoint a minister with overall responsibility for media.

– Invest in a training support scheme for all journalists.

We don’t need to hear politicians say how important journalism is for our democracy anymore. We need action. For the sake of democracy