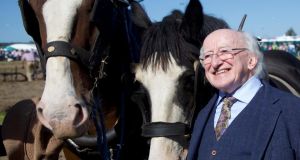 President Michael D Higgins: this week at the Ploughing Championships, he called for fair treatment of small farmers and warned of the dangers of precarious employment conditions and casualisation of labour. Photograph: Stephen Collins/Collins Photos

The President’s recent remarks about Defence Forces pay have generated controversy. Michael D Higgins stated that “serving men and women should have conditions including an income and prospects that are sufficient to provide for themselves and their families”. A Minister termed the comment “quite unusual”, and senior government figures privately expressed displeasure at the comments.

It is clear the President feels very strongly about this issue, and that the low pay of our Defence Forces is a matter of major importance and ongoing political concern. But the political relevance and sensitivity of the issue is precisely why the President should not have made these comments.

They go beyond what we traditionally think of as the President’s role as neutral, apolitical head of state who does not comment on matters of political disputes. This perceived neutrality is of great importance to the President’s core constitutional functions.

Some will argue that the President was right to speak out on a major issue about which he feels passionate. The President is, moreover, the Supreme Commander of the Defence Forces under the Constitution, even if this role is purely ceremonial in practice. If the President is ever to comment on a politically contentious matter, some think this should be it.

But looking at the purpose of this restriction in article 13.7, and the role of the President in Irish politics, there is a strong case against making such comments. Presidents have long stayed out of party politics and the arena of policy and parliament in order to fulfil the President’s most important constitutional functions, which require a credible claim of independent judgment on politically sensitive matters.

Our President has relatively few independent powers; almost all are exercised on the binding advice of the Government. But there are two major exceptions.

First, the President, in consultation with the Council of State, must decide if a Bill passed by the legislature should be referred to the Supreme Court to test its constitutionality.

Second, the President has to decide – at his absolute discretion – to grant or refuse a dissolution of the Dáil requested by a Taoiseach who has lost the support of the House. The potential political importance of this function can be seen in recent events in Westminster.

These powers are rarely used, but when they are they can have major political consequences for the government of the day, calling into question the constitutionality of major pieces of legislation, and delaying their enactment, and controlling the electoral politics of the lower house of parliament.

This is why the convention that the President refrains from any political commentary exists. It is not an absolute or unchangeable rule: as president, Mary Robinson was more outspoken on matters of national concern than many of her predecessors, including discussing the politics of Northern Ireland and divorce.

Higgins has gone further, commenting on, amongst other things, austerity, tax cuts, an inquest into the death of Savita Halappanavar and Brexit, often attracting some controversy. Most recently, he this week called for fair treatment of small farmers in the wake of a deal to end the beef dispute, and warned of the dangers of precarious employment conditions and casualisation of labour in a speech to the International Labour Organisation.

This position makes sense, as it separates commenting on general matters of principle – which recent presidents, in particular, have done to widespread approval – with intervention in active political disputes.

But the President’s comments on Defence Forces pay may cross this line: in commenting on a live and ongoing pay dispute. With financial implications for the State, the President has come very close to intervening directly in a political and policy debate.

Even if these comments are relatively innocuous, as the Government shares concerns about Defence Forces pay, commenting on such issues may begin to erode the perception of political neutrality central to the President’s core constitutional role. When and if the time comes for a president to use these powers, it may be more difficult to do so with credible impartiality.

It would be preferable for the President to remain silent on such issues, even if he feels personally compelled to speak out. Though that may be challenging, his office and its constitutional duties require it.

Dr David Kenny is assistant professor of law at Trinity College Dublin. He is co-author of the leading text on Irish constitutional law, Kelly: the Irish Constitution

1 ‘IRA has gone away’: McDonald responds to Garda Commissioner’s comments
2 A Dad with brain cancer: I was given 18 months to live, it put things into perspective
3 Drug dealer loses codes for €53.6m bitcoin accounts
4 Ireland Slam England at the Gardens to open up Grand ambitions
5 Woman found living in squalor with flies coming from blanket she was using
Real news has value SUBSCRIBE