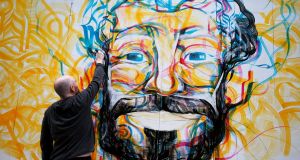 Guy McKinley paints a mural of Liverpool’s star striker Mo Salah from Egypt on hoarding in Liverpool’s city centre ahead of his team’s Champions League final in Kiev against Real Madrid. REUTERS/Andrew Yates

Three years ago, during a football match at Anfield, a Liverpool fan came across two fellow fans, both Muslims, unfolding their prayers mats in a stairwell at the ground in order to pray. He took a picture of the men and tweeted it with the observation “Muslim fan praying at the match. Disgrace”.

Liverpool F.C. now have a multi-faith room so people can pray in peace, they serve halal food for Muslim fans and Anfield reverberates to fans jubilantly singing of the club’s star striker, Mo Salah - an Egyptian Muslim, “If he scores another few then I’ll be Muslim too, He’s sitting in the Mosque that’s where I wanna be”.

Salah, who is devout in his faith, performs sujood - the Islamic act of prostration - on the many occasions that he scores for Liverpool. With the Merseyside team being the most supported British football team in Ireland, many eyes will be on Salah tonight as he hopes to lead Liverpool to a Champions League final win over Real Madrid.

In the run up to tonight’s final, Liverpool fans and the general football world have been discussing - in some detailed knowledge - how Salah’s observance of Ramadan (the Muslim month of fasting during daylight hours) could impact on his performance tonight.

There is also a concomitant understanding of the significance and importance of Ramadan for Muslims in general and Salah in particular.

Salah himself has made it known that although he could get an exemption from fasting on the day of the match (on the grounds that he is travelling - tonight’s match takes place in Kiev) he will be fasting today from sunrise to sunset - meaning he can’t eat or drink until about an hour before kick-off.

In very broad strokes, the neat narrative here is that football fans have gone from labelling Muslims praying a “disgrace” to now promising to convert to Islam if Salah keeps scoring.

But it’s too neat and it’s too tidy.The coverage of Salah this week breathlessly salutes how the striker has “reframed public perceptions of Islam”, “has enabled more understanding which has reduced stereotypes, built cultural bridges and broken down barriers” - that he has elevated the discourse around Islam to a higher level than any amount of inter-faith governmental initiatives or TED talks about “diversity and inclusivity”.

But the understanding, respect and adulation afforded Salah is conditional, one suspects, on him continuing to be a Roy of the Rovers heroic figure. For some in the Muslim world, Salah has the good fortune to fall on the right side of the Good Muslim/Bad Muslim binary divide.

Salah is the Good Muslim Immigrant. Writer Nikesh Shukla has mapped out the conditions by which one becomes “good”: “We are deemed bad immigrants - job-stealers, benefit-scroungers, girlfriend-thieves, refugees - until we cross over in their consciousness, through popular culture: winning races and baking good cakes”.

The latter is a reference to athlete Mo Farah and Nadiya Hussain (the winner of BBC’s The Great British Break Off in 2015). For the (undoubtedly important) ability to conjure up a moist Victoria Sponge, Hussein was lauded, as Salah is now, for “doing more for the perception of Muslims and multicultural relations than any politician or community leader could ever hope for”.

That a major world religion, already carrying unwelcome baggage of prejudice and stereotyping, gets fashionably and momentarily embraced on the basis of baking a good cake or scoring a a spectacular goal is crass and facile.

The British born Pakistani poet Suhaiymah Manzoor-Khan speaks about the need to respect Muslims - not just those who excel in athletics or bakery: “Love us when we are lazy, love us when we are poor, love us high as kites, unemployed, joy riding, time wasting, failing at school, love us filthy”.

It’s quite ridiculous to see Salah as being representative of the some 1.5 billion Muslims in the world but away from his performing sujood or strictly adhering to Ramadan, it should be instructive to many - particularly in the world of football - that Islam forbids alcohol and gambling, the two vices that have ruined many a player’s and a fan’s lives.

He has made more people familiar with the practice of Zakat - the Muslim obligation to donate a percentage of your income to benefit the needy. While other big name footballers pose beside their new Lamborghini and flaunt a blinged-up Versace lifestyle, Salah spends his money building schools and Mosques in the Egyptian village he comes from and pays for the dialysis machines in the local hospital.

And it instructive too that it takes a leading figure from the sports world, such as Salah, to reach places in the public consciousness that other public figures can’t. American footballer Colin Kaepernick ignited an ongoing national debate about racial inequality in the U.S. by one day two years ago refusing to stand for the national anthem.

Sport can and does mean more than any amount of white papers, academic reports or media conferences on the issues that matter. In Ireland we have seen how Syrian refugees assimilated rapidly into their new communities by their eager and happy involvement in GAA sports.

And while people wring their hands over how MMA star Conor McGregor behaves, it perhaps goes unnoticed how many people are now training hard in gyms hoping to emulate his sporting - and financial - success.

We hear a lot about this country’s concerns over childhood obesity levels - a band-aid style Sugar tax is not going to make any dent in this nation’s considerable bulk. Having free and easy availability to sport facilities has been proven to help with childhood obesity - as it has been proven to help with issues of self-esteem/mental health - not to mention how it provides an alternative for those at risk of delinquent behaviour.

As Mo Salah lines out for tonight in the Champions League final, it’s not just Liverpool fans but Salah’s global Muslim fan base who will have a fresh appreciation of the legendary Liverpool manager Bill Shankly’s enduring epigram: “Some people think football is a matter of life and death, I assure you, it’s much more serious than that”.