Its official - Ryanair deserves the credit for European integration 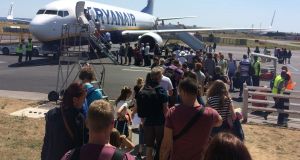 Ryanair plane at Beauvais Airport, outside Paris France: In 1992 European consumers could choose from 1,000 destinations; in 2018 they can choose from over 6,000. Photograph: Bryan O’Brien

Years ago, the argument was made that low-cost airlines have done more to bring Europe together than any diplomats or commissioners. Last week, I was in Brussels for the presentation of the first in-depth study into this argument by the independent think tank Centre for European Policy Studies (CEPS), using hard data about the decline in air fares, the growth of tourism and the increase in travel frequency over the past two decades. The conclusion of this study is clear: low-cost airlines have played a pivotal role in the integration of Europe and its citizens which has benefited the EU economy and society to a great extent.

Today, many people in Europe are questioning the benefits of EU membership. I count myself in that number on many issues, but on this issue I am certain – the liberalisation of European aviation in the 1990s was probably the best thing the EU ever did. Hats off to the EU. At the time, this was a brave step that faced resistance from many sides: member states, heavily protected legacy flag-carriers, rail companies and even airports. It was a cosy cartel model – why open air travel up to the masses and rock the boat for an industry where everyone did well? Except the consumer.

Before this liberalisation, air travel was expensive and ordinary consumers rarely travelled by air. In the past eight years alone, there has been a 33 per cent increase in air travel by consumers in the EU28 states and, in 2018, the majority of this intra-European air travel by EU consumers will be on low-cost airlines.

One irony is that it was the UK (which is now leaving Europe) that lead the way in the 1990s. It is where Ryanair and EasyJet started and the UK consumer has benefited the most from greater choice and the lowest air fares. Indeed, over 55 per cent of flights to and from the UK are on a low-cost airline. Contrast that with Germany (which is now leading Europe), where just 15 per cent of flights are low-cost – and, as a result, air fares in Germany are still among the highest across the continent.

This CEPS study highlights six key aspects of European integration that would not be possible without low-cost airlines:

- Labour mobility. Citizens using low-cost airlines to live in one state and work in another. According to the European Commission, there are now 11.8 million of these mobile EU workers.

- Business travel. This has expanded and no longer has to be routed through the biggest hub airports as point-to-point routes are more efficient. In particular, SMEs have benefited and expanded their business internationally in a way that was not possible before.

- Educational mobility. Over nine million European students have studied in another European country and 25 per cent of these now live and work in another EU state than the one they were educated in.

- Leisure tourists. Europe’s borders have been broken down and every corner of the continent has been made accessible. Low-cost travel has literally put these places on the map. The European Commission highlights the staggering fact that in 1992 European consumers could choose from 1,000 destinations and in 2018 they can choose from over 6,000.

- Regional development. Investing in airports brings job creation (both airline and supporting ancillary employment) as well as high-spending tourists to the regions. Bergamo in Italy is a prime example – in 2002, it was a barely used air strip in a city with high unemployment and today it’s Italy’s third-biggest airport and has over 10 million annual Ryanair passengers alone.

- Connected emigrants. There was a time when Irish people who lived in the UK got home once a year and paid £300 to do so. Now the typical EU citizen living in another EU state gets home on average 3½ times a year. This keeps communities strong and many a grandparent happy.

At a time when the EU is finding it difficult to show its citizens how it benefits their lives, it’s time it revisited its own history and put the consumer and their free movement back at the centre of what the EU does and promotes.

Making European air travel more simple, reliable and low-cost would benefit consumers more than anything else the EU can do. When was the last time an average consumer got excited about the agricultural policy or banking regulation? But consumers will get excited about the mobility allowed by cheaper air travel, new destinations to choose from and having a travel experience that is not disrupted.

The EU needs to do more, and show member states that national travel taxes only reduce mobility and tourism. The EU must put pressure on the French government to end the chronic disruption caused to consumers every year by a small group of air traffic controllers in France. At the very least, overflying of French airspace has to be maintained during these strikes.

The EU also needs to replace the failed airport charges directive with stronger regulation that tackles airport charges and constraints. Over 50 per cent of the world’s most congested airports are in Europe, and capacity constraints on the ground and in the air need to be solved so the industry can continue to grow. Europe needs more airports and this competition will in turn bring more choice and lower fares to consumers.

People love to travel. It’s one of life’s more interesting and joyful activities and it improves our lives. Make that travel more affordable, reliable and accessible, and consumers will again thank the EU and better understand how it improves their lives.

Pope’s words on homosexuality must find form in papal document

1 Love in a time of Covid: John and Mary marry over 40 years after first meeting
2 Sacha Baron Cohen: ‘I had to ring the alarm bell and say democracy is in peril’
3 Big Phil is being very big about his former boss’s Covid quarantine trip
4 Sinn Féin’s stand on Covid is facing increasing questions from political rivals
5 Two hundred Irish retailers for all your online Christmas shopping
Real news has value SUBSCRIBE