Altruism is key to a more resilient society

Shana Cohen: It is not enough to assume supports and services that enhance individual wellbeing will add up to collective strength 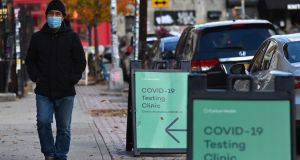 A man walking past a Covid-19 testing site in New York: in the US, opposing views on confronting the virus have seemingly fallen along party lines, so support for one party or another appears to represent preference for an aggressive or hands-off approach. Photograph: Angela Weiss/AFP via Getty Images

The pandemic has been bookended for me by two personal events, one altruistic and the other selfish. The altruistic event happened in March, when the senior centre in the Bay Area where my father goes for activities closed to protect its service users. A volunteer, himself retired, decided to hold online classes on history and literature for those interested in attending. He has been offering these classes four or five days a week since then, providing older people stuck at home, including my father, a daily routine, social interaction, and education.

The second suggested self-centredness. In mid-December, my brother and his family and my 79-year-old mother in Texas contracted Covid due to the failure of others to take adequate precautions, to not stay at home when they did not feel well.

The contrast reflects, at least in my view, the choice facing policymakers about how to govern – or, rather, which values they want to demonstrate in their manner of governing.

Much is being made of president-elect Biden’s fundamental decency as a man and the example he will set as leader of the country, especially in comparison with the lack of empathy President Trump has shown, even to those who voted for him. Modelling behaviour for others may have limited impact, however. The more critical question is how to institutionalise generosity and altruism. Can these qualities even be legislated for, or are they essentially behaviours that a government can only hope for in times of crisis?

This institutionalisation does not mean supporting charities, which often end up filling gaps left by inadequate public services. Former British prime minister David Cameron tried to push an agenda of “Big Society”, but it fizzled out with austerity and then Brexit. In fact, local religious leaders and community and voluntary organisations have ended up fighting the most extreme consequences of poverty in the UK, as families queue at food banks because they do not have enough money to feed themselves. Imposing years of austerity in the UK was a selfish gesture, in that it ignored the misery public sector cuts and welfare reforms would create. Brexit is arguably also a selfish gesture, because it will expand the misery to other groups.

State governments in the US have framed mandating the wearing of masks and other measures to prevent the spread of the virus as an infringement on civil liberties. This decision translates in practice into permission to get sick and to make others sick as well. In the US, opposing views on confronting the virus have seemingly fallen along party lines, so support for one party or another appears to represent preference for an aggressive or hands-off approach. Yet, shouldn’t concern for others transcend temporal political clashes and clamouring for votes?

Much is being made of the term “resilience” in government strategies to confront the impact of the pandemic on physical and mental health as well as the economy. The Irish Government’s Resilience and Recovery 2020-2021: Plan for Living with Covid-19 defines resilience as “confidence in our ability to support each other to cope with and respond to the stresses and difficulties”.

However, the specific actions outlined in the plan concentrate on the individual and assume, through investing in economic supports and access to services, that enhancing individual wellbeing will add up to collective strength. Policy-proofing for gender and equality often makes the same assumption, in that legislating for and protecting existing individual rights, collecting relevant data, and integrating specific targets into policy development, will lead to a more inclusive and fair society.

The Government subscribes to “equality budgeting”, which aims to provide “greater information on the likely impact of budgetary measures across a range of areas such as income, health and education, and how outcomes differ across gender, age, ethnicity and so on. Equality budgeting helps policymakers to better anticipate potential impacts in the budgetary process, thereby enhancing the Government’s decision-making framework.”

Perhaps, then, policymakers need to take another step and consider how policy affects how individuals treat others who differ from them or who require personal sacrifices of others in order to safeguard their own health, community, or income. This is certainly not a call for an authoritarian-like substitution of state for society, where individual behaviour is regulated to reinforce political power.

Rather, it means policies should imagine the experience of the individual interacting with public or other services and consider the effect on everyone like themselves. For instance, do women seeking to separate from an abusive partner suffer humiliation, and the risk of further abuse, if it is difficult to obtain a date for a court hearing? Are children from Traveller communities embarrassed in school because teachers have little expectation they will perform well academically?

Those experiences harm not just the particular group and individuals in question, but those around them, whose actions, even if unintentional, have a negative effect. In the post-Covid world, when we no longer have to be as attentive to the health of others, policymakers should still consider if their decisions will help the intended beneficiaries truly feel more confident in the respect and concern of others, so that the abstract aim of creating “resilience” becomes more tangible in practice.

Shana Cohen is the director of Tasc, the think tank for social change