Britain is now divided as never before

Research reveals two tribes who intensely dislike each other, and who are not terribly informed about each other 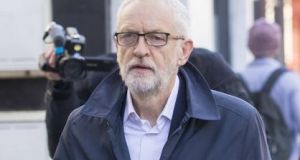 Jeremy Corbyn’s leadership has been a disaster, not just because of this dismal electoral result but because of a complete inability to read the public mood. Photograph: Getty Images

The Conservative landslide does not mean that the Brexit divide has gone away. Clearly neither of the two biggest political parties in Britain are in any way ready to take on the task of healing that divide. Boris Johnson has been rewarded for bluster, buffoonery and mendacity. On the other hand, Jeremy Corbyn’s leadership has been a disaster, not just because of this dismal electoral result but because of a complete inability to read the public mood.

The Conservatives will be too busy crowing and the Labour Party too busy haemorrhaging to pay attention to trying to overcome polarisation. Not that people identify with political parties as a source of solutions or much else

Research by the King’s College policy institute over the last few months has shown, to no one’s great surprise, that being a leaver or a remainer trumps party political allegiance as a marker of identity.

This week another policy institute poll showed worrying levels of stereotyping and misinformation in relation to people who held opposing views about Brexit.

Conflict and division are parts of human experience. But one of the key questions is how differences and conflicts are navigated in order to avoid catastrophic societal divisions.

Most of us assume that people divide over issues. The interesting thing about the policy institute research is that it shows that British division is less about issues and more about what it calls “affective polarisation”.

At its simplest affective polarisation means loving your side because they are your side and hating the other side for not being your side.

In the United States affective polarisation tends to break down along party political lines. In Britain it’s different. For example, last week’s policy institute polls showed that 55 per cent of people identified very strongly with “leave” or “remain”, up from 44 per cent last year. In contrast, only 20 per cent strongly identified with a political party. Despite this distrust of supporters from other political parties is still high.

The policy institute asked 2,000 voters: if zero is cold and 100 warm – how would you rate supporters of the other party? Labour supporters gave Conservatives 15 out of 100, while Tories gave Labour a score of 18.

At the height of the 2016 US presidential election, Republicans rated Democrats 29 out of 100, while Democrats rated Republicans at 31.

Aside from political affiliation, people on either side of the Brexit debate strongly dislike people on the other side even when agreeing with them on other issues which they also consider to be important. But, worryingly, both sides also often assume that they disagree more on other issues than they actually do.

There is a high level of inaccurate stereotyping and mutual misunderstanding. Take the NHS, which is so central to British identity that a segment of the opening ceremony of the London Olympics was dedicated to it. (In the unlikely event that we ever host the Olympics, the HSE will not feature.)

So you have two tribes who intensely dislike each other and who are not terribly informed about each other. The inaccurate stereotyping makes the divisions seem even deeper than they actually are.

Britain appears to be even more polarised than the US, though not as polarised when it comes to marriage, thankfully. While it is extraordinary that 40 per cent of remainers would be upset if a child married a leave supporter, only 11 per cent of leavers would object to a remainer son or daughter-in-law.

In contrast, in 2016 60 per cent of Democrats and 63 per cent of Republicans wanted their child to marry someone from their own party.

As a non-relativist when it comes to morality, I do not think that some Pollyanna-ish appeal to “why can’t we all just get along?” is sufficient. Some viewpoints are more right than others. Some issues are also more essential than others.

There are, of course, vital issues at play in Brexit, not least for Ireland and most particularly Northern Ireland. But given that there are existential challenges facing the planet such as climate change, writing each other off as baskets of deplorables or citizens of nowhere because of Brexit seems less than helpful.

In a civilised country it is perfectly fine to try to persuade others to change their minds if you believe they are wrong. However, aside from the spineless who are not much of a challenge anyway, being stereotyped and hated rarely changes anyone’s mind.

But Britain and every other divided nation eventually have to hammer out some way of living together. The alternatives are grim if they do not, as we know all too well on our own small island.