Irish Times view on Scottish independence and instability in the UK 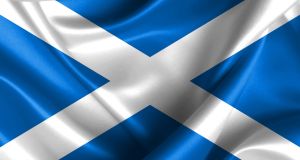 Polling evidence from Scotland suggests strong momentum in favour of independence among elite and public opinion there.

The latest political and polling evidence from Scotland suggests there is a strong momentum in favour of independence among elite and public opinion there. The Scottish National Party dominates the political landscape and is more and more confident it will gain a mandate for a new independence referendum by winning next year’s elections to the Scottish Parliament. Opinion polling backs that up, putting support for independence at 54 per cent compared to the devolved status quo, with larger majorities among the under-55s. It is becoming harder for the UK’s Conservative government to resist.

The prospect of a hard Brexit and resentment over London’s centralisation of decisions on it, and over its handling of the Covid-19 crisis, are the principal factors driving the momentum. They build on longer term shifts of conviction among a growing number of Scots that the nation’s wellbeing and prosperity are best assured by an independent state within the EU. This is a political and civic change of view which bolsters feelings of cultural and national identity that have also been growing. Scottish and UK unionists have difficulty understanding such a broad-based nationalism. It cannot be dismissed as a narrow bigotry but requires that a much more reasoned case be made for Scotland to remain in the Union.

That case is now being argued by a highly centralised Conservative government with an English majority led by Boris Johnson and determined to assert its own independence from the EU. All these elements rub up against Scottish preferences to stay in or close to the EU and to have sovereignty over such decisions. These issues are entangled with the Covid-19 ones, as Nicola Sturgeon’s handling of the pandemic is seen by Scots to be more effective than Johnson’s. The more assertive unionism he articulates about UK funding for Scottish infrastructure and welfare is similarly abrasive for Scots who say independence is affordable and more sustainable.

This growing instability in the UK has major implications for Ireland North and South. A constitutional crisis over Scotland’s place in its union next year would coincide with the fallout from whatever agreement is reached between London and Brussels on Brexit. A Conservative government so wedded to reclaiming external sovereignty from the EU is less willing to concede it internally to Scotland – or to Northern Ireland, should there be a commensurate shift of opinion towards a border referendum there in coming years.

Seen from Dublin these changes reinforce the case made by the new Government that practical measures be taken to improve North-South relations, accompanied by open public dialogue on a shared island of Ireland. Equally urgent and imperative is its case for a strategic review of Irish-British relations so they can be strengthened to help manage such deep uncertainties.