Sole rebel: Frank McNally on the joys of running in bare feet

It’s as if we think of our feet as footwear in themselves, which they are 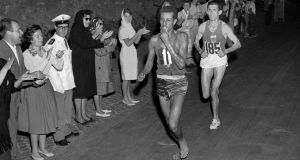 One of the apparent eccentricities of my middle-age is that, whenever conditions allow these days, I have taken to running barefoot in the park. It’s among the joys of summer now, even Irish summer.  And to me, it seems a perfectly natural thing. But other people find it odd.

While I ran laps of the Phoenix Park Polo Grounds one cool rainy evening recently, for example, an amused bystander called me a “hardy man”. It took a second or two to realise he was referring to the lack of shoes and socks. I had momentarily forgotten I was an oddball.

In fairness, Neil Simon wrote a whole play once about the politics of shoelessness vis-a-vis social convention. His “Barefoot in the Park” also became a Hollywood movie, starring Jane Fonda and Robert Redford as a couple of misfit newly-weds in a small New York apartment. He’s a buttoned-up lawyer, she’s a free-spirit trying to convert him to the cause of occasional podiatric nudity in public.

But here in Ireland, traditionally, the phrase we use about such things is doing something “in our bare feet”. The preposition seems telling.

As recently as last week in this very space, for example, Áine Ryan wrote of a Mayo grandfather who “went to school across the fields in his bare feet”.

And even if Irish schoolchildren all wear shoes now, the phrase still lives. We still do things “in” our bare feet, never “on” them.  It’s as if we think of our feet as footwear in themselves, which – in warm weather, at least – they are.

The truth is, I run in bare feet only because it’s easier. At this time of year, the group I train with tends to be doing high-intensity repeats, or “speed-work” as it’s known (euphemistically in my case). And when running 400-metre sprints on bumpy trails, I find, all that expensive rubber the shoe companies pack into their soles just gets in the way.

Even if your feet are not overheating, your shoes are bouncing off the uneven surface like rugby balls.  To keep balance (never mind pace) at my age, I depend on constant, good-quality intelligence about where exactly the ground is at all times.

I wouldn’t do it on concrete, of course, or in long grass, where unpleasant surprises might lurk. I’m not sure I’d do in a New York park, for that matter.  Whereas in the film, not only does a drunken Redford end up running barefoot in the park, he later climbs onto the roof of his high-rise apartment. And that’s not a recommended surface either.

But even the great Kenyan distance runners, who grow up barefoot, tend to wear name-brand shoes in all their races now: more perhaps for the cushioning impact of the sponsorship than the padding. It’s 60 years since Ethiopia’s Abebe Bikila won the Olympic Marathon in bare feet. When he retained it four years later, he wore shoes, which has set the tone since.

Years before Neil Simon’s play, by the way, the newspaper columnist John D Sheridan had a similar idea. I don’t think Sheridan ever did much running anywhere, except maybe for the bus.

But in a 1958 essay, he recalled the experience of spending childhood summers in “hill country”, where local kids wore their shoes only to Sunday Mass.

Everything else they did in bare feet, so he did likewise, and as a city boy found it liberating. He also performed some athletic feats in the process, although not for the exercise.

It was a way of coping with one of the surfaces the children had to negotiate: stubble fields, wherein the sawn-off cornstalks “prodded like lances into the soles of your feet”. The trick was not to linger, but to “run bravely”.

It was good to be reminded that you had five toes on each feet, all semi-autonomous, Sheridan recalled of those summers, before growing philosophical: “Your toes are very near to you when you are young enough to put them into your mouth without strain or repugnance, but they recede from you gradually the very moment you begin to walk the roads […] until in the end they become distant relations.”

The estrangement must have been complete at the time he was writing. Stubble fields were a distant memory by then and his feet seem to have been locked away for decades in shoes.  He makes them sound a bit like a 10-digit version of the portrait of Dorian Gray: “They are growing old now – and few things grow old less gracefully than toes and feet – but they can look back on golden summers”.

1 FinCEN Files: Dublin business features in leak of US treasury documents
2 Sam Bennett secures Champs-Élysées win and Tour de France green
3 The Sack of Balbriggan: The burning of a town that shocked the world 100 years ago
4 Coronavirus: 396 more cases as public is urged to help protect ‘older and vulnerable’
5 Mike Murphy: ‘I won’t do another over-70s lockdown’
Real news has value SUBSCRIBE