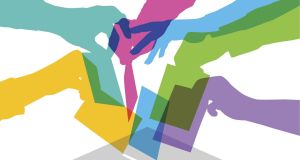 Blasphemy referendum: A constitutional crime of blasphemy, “defamation of religion”, is not tenable in a modern, democratic republic. Illustration: Getty

Amid the political drama of recent days, with ongoing focus on the presidential election, there has been little coherent analysis of the other vote on October 26th; namely the referendum to delete blasphemy from article 40.6.1.i of the Constitution. Some commentators have even suggested they will vote no because they believe the referendum is a waste of money, or because other constitutional amendments should have been prioritised.

These facile arguments miss the substantive point of this important referendum. Since it is being held the same day as the presidential election, minimal State expense is incurred. And just because other amendments are not before us, is no reason to oppose this particular progressive reform.

In reality, there are several crucial reasons to vote yes for the removal of blasphemy.

First, it is outdated. A constitutional crime of blasphemy, “defamation of religion”, is not tenable in a modern, democratic republic. Blasphemy may be claimed when, for example, a person feels offended by satirical anti-clerical commentary or by the publication of anti-religious cartoons. The crime emerged during an era when church and state were seen as a single entity, when defaming the established religion was equivalent to committing treason.

The blasphemy offence is an unnecessary, undue encroachment on free speech

Of course, we live in a republic, premised on separation of church and state, where such a crime should not be relevant. We do, however, have a long and shameful history of collusion between church and state authorities evident in the repression of women and children, notably in industrial schools and Magdalene laundries, symbols of the undue dominance of one particular church. As recent constitutional votes on marriage equality and abortion show, we are thankfully moving out of that era. But anyone with regard for history should be wary of retaining an offence in our law that provides an elevated position for religion above other belief systems.

Secondly, the blasphemy offence is an unnecessary, undue encroachment on free speech. This is why blasphemy crimes are becoming obsolete across Europe. Many now accept that better protection can be offered to the religious faiths and belief systems of individuals through incitement to hatred laws. Here, the Prohibition of Incitement to Hatred Act, 1989, protects against hate speech on grounds of religion, in a manner more appropriate to a republic.

It is also unnecessary because the Constitution is not a criminal code, nor should it be. Instead, like any constitution, it represents a broad statement about fundamental aspirations and principles of governance. Indeed, I would have favoured a referendum on deletion not only of blasphemy from article 40.6.1.i but also of the other similarly anachronistic offences (those defined as “publication or utterance . . . of seditious or indecent matter”).

Apart from the effect of the offence here, it has also had adverse international impact

Thirdly, blasphemy law is dangerous. Some have argued that the status quo has caused no harm. But this is patently wrong. The constitutional blasphemy offence was referred to by Mr Justice Barrington in the 1999 case of Corway v Independent Newspapers, when he noted that it was for the legislature, not the courts, to define the crime. This case was taken against the Irish Independent by an individual, John Corway, who took offence at a satirical cartoon that he claimed caused offence to the Eucharist.

The case was subsequently relied on by former minister for justice Dermot Ahern when he unexpectedly introduced a statutory offence of blasphemy in section 36 of the Defamation Act, 2009, a provision that he said was necessitated by the Constitution. A maximum fine of €25,000 is provided for those convicted. At the time, Ahern said the offence would be virtually impossible to prosecute. But in 2015, a complaint was made at Ennis Garda station referring to comments made about religion by comedian and actor Stephen Fry on RTÉ. While he was ultimately not prosecuted, the criminal complaint made embarrassing international headlines.

Apart from the effect of the offence here, it has also had adverse international impact. Because section 36 was introduced so recently, it has been used by governments elsewhere to justify retention of blasphemy laws which are actively used to bolster prejudice in other states against minority faiths, including Christian communities. Indeed, the history of blasphemy laws indicate they have typically been used by members of one religion against those of others, often minority groups, in order to pursue ideological battles.

For these reasons, among other, removal of blasphemy has long been recommended. In 1991, the Law Reform Commission stated there was “no place for an offence of blasphemous libel in a society which respects freedom of speech”. The expert Constitution Review Group called for deletion of the offence in 1996, as did the Constitutional Convention in 2013.

This referendum is long overdue. Blasphemy is a medieval crime, with no place in the Constitution of a republic. I will be voting yes for its removal.