Big tech’s bargain: if you want to be online, then give up your rights 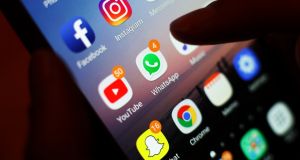 ‘What if the biggest threats to human rights in the digital world are not despots but rather the platforms we use every day in our online lives?’ File photograph: Yui Mok/PA Wire

Even if they were to peter out tomorrow, the protests that have brought parts of Hong Kong to a standstill since late summer would still be remembered as a watershed. That’s largely because of the demonstrators’ open demand for democracy, the scale of the leaderless movement they have formed and their unyielding resolve in the face of direct threats from a regime whose capacity for brutality in suppressing secessionist claims nobody could doubt. But the protests represent a shift in another important respect, one that marks them out as peculiarly modern. Watch the footage: the young people on the streets act in open defiance of the authorities, yet they do so while engaged in a constant effort at self-concealment. The umbrellas, the laser beams, the face masks, the no-photograph rule among the protesters – all are designed not to repel the policemen who run at them with truncheons but to thwart the biggest, most sophisticated state surveillance system in the world.

China, the global leader in techno-authoritarianism, has assembled a vast apparatus – parts of it visible, other parts unseen – to monitor virtually every aspect of people’s lives. The Hong Kong protesters have used low-tech fixes to evade the ubiquitous cameras. They have also taken their own digital precautions; for example, by deleting all Chinese apps from their phones.

Across the world, those on-street cameras are still the stock image of choice to illustrate fears of a tech-driven dystopia. And when we consider how technology can endanger human rights, we think first of states and the ways they have found to deploy new digital tools to spy on or constrain their own citizens.

But what if we’re looking in the wrong place? What if the biggest threats to human rights in the digital world are not paranoid despots but rather the platforms we use every day in our online lives?

In an important new report, Amnesty International homes in on two of those platforms, Google and Facebook, and argues that their surveillance-based business models are predicated on a Faustian bargain: to access the vast resources of the internet, the individual must submit to a system that by definition denies his or her human rights.

The model relies on the mass accumulation of data on each user – location, history, sex, ethnicity, age, mood, political views, vulnerabilities and so on. That data is used to make predictions about future behaviour – the better the predictions, the more advertisers will pay for them. Privacy advocates have been raising the alarm about loss of privacy for years – to limited effect, from campaigners’ point of view. But recently, as the broader implications of private mass data-harvesting have been clarified, the mainstream debate has taken on new dimensions. And it seems to be gaining traction.

In her groundbreaking The Age of Surveillance Capitalism, Shoshana Zuboff shows how the threats posed by the new market form invented by Google and Facebook go far beyond privacy. These companies are creating new forms of power and new ways of modifying individual behaviour, both online and in the real world. Remember that Facebook has carried out behavioural experiments – nudging people to vote in elections or adjusting users’ moods by presenting them with different posts in their feed. And these companies are doing all of this, Zuboff argues, outside individual awareness or public accountability. “They know everything about us; we know almost nothing about them,” she writes.

Facebook denies that its model involves surveillance at all. Use of its products is voluntary, it argues, which distinguishes it from involuntary state surveillance. This is a shaky argument given that one-third of humans use a Facebook-owned service every day. It is virtually unavoidable. Using its services is voluntary only in the way that using public roads and paths is voluntary.

While the data-harvesting model was designed with advertisers in mind, the information the tech giants sweep up is of immense interest to state authorities, including intelligence agencies, police and immigration services. Edward Snowden gave us glimpses into how intelligence agencies found ways to access the tech companies’ data. No matter how aggressively these companies guard your information, the risks of it falling into the hands of state actors are clearly very real.

These algorithmic systems have a range of knock-on effects, in other words. Amnesty argues that many of these effects impinge on people’s rights to freedom of expression and freedom of thought, and the right to equality and non-discrimination. At the most basic level, by influencing people’s thoughts and modifying their moods or opinions, the firms can affect one’s ability to make autonomous choices. By shrinking the private sphere and corralling people into personalised online zones, the algorithms hinder the free development and exchange of ideas. “The sheer scale of the intrusion of Google and Facebook’s business model into our private lives through ubiquitous and constant surveillance has massively shrunk the space necessary for us to define who we are,” according to the report.

Zuboff calls for a social awakening to the ways in which technology giants are changing our lives and societies. This may be happening already. Governments are beginning to impose constraints on the regulatory Wild West in which the tech giants have been operating, and it no longer sounds far-fetched to imagine that one day Facebook or Google will be broken up. Slowly, a countermovement seems to be stirring.