Whenever Trump says ‘infested’, we know he’s talking about people of colour 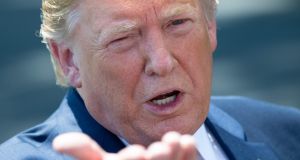 US President Donald Trump speaks to the media after arriving on the South Lawn of the White House in Washington, DC, July 30, 2019, following a trip to the 400th anniversary of Jamestown, Virginia. SAUL LOEB/AFP/Getty Images

I’ve never accused anyone of being prone to infestations. But if I were inclined to sink that low, I suspect my attention would be directed towards the 45th president of the United States. It’s not all Donald Trump’s fault. Who can blame anyone for spending most of their life in New York – a city I love, despite the fact that it harbours one rodent for every four people?

Trump hardly had a choice about moving to the White House in 2017, home for two centuries, reportedly, to an unwanted population of rats, ants and even raccoons. Yet it’s hard to avoid holding Trump directly responsible for the wider range of public health hazards reported at his luxury Mar-a-Lago resort – 78 were reported in the three years to 2017, including soiled kitchen utensils and potentially parasite-affected smoked salmon. Hard, too, to ignore the fact that his son-in-law, Jared Kushner, has been described as a “slum landlord” for the multiple health and safety violations reported in his family firm’s 9,000 Baltimore properties, including mice, maggots and mould.

Trump has the knack of dehumanising human beings, projecting the idea of ‘infestation’ on to their very existence

It’s pretty disgusting – enough to make you lose your appetite but not to break your heart. That feat is reserved for Trump’s knack – one he has demonstrated many, many times – of dehumanising human beings, projecting the idea of “infestation” on to their very existence.

Because let’s be clear: when Trump talks about a place being “infested”, he means it’s inhabited by people who are not white, whether Ebola-stricken west Africa in 2014; Atlanta in 2017, home to more African-American graduates than any other city; “sanctuary cities” in 2018, with their offer of safe harbour for undocumented migrants; or the “squad” – four progressive congresswomen, all Americans, all women of colour – whom Trump said should go “back” to the “crime-infested places” to which, in his imagination, they belong.

Now he describes Baltimore, a city with proportionally one of the highest African-American populations in the US, as a “disgusting, rat and rodent infested mess”, holding the respected black congressman who represents the district, Elijah Cummings, responsible.

As usual, the people most affected by Trump’s escalation of racist rhetoric – black and brown Americans – have been doing the work of explaining why Trump’s words carry racial undertones. A CNN anchor who grew up in Baltimore broke down on air. “A lot of people get up and go to work there, they care for their families there, they love their children, who pledge allegiance to the flag, just like people who live in districts of congressmen who support you, sir,” Victor Blackwell said. “They are Americans, too.”

It’s as maddening as it is moving to watch Blackwell feel compelled to explain – after Trump described Baltimore as a place “no human being would want to live” – that his friends and family are indeed human. As black people we keep having to defend our humanity because, accompanying the racism that is revealing itself to be a central plank of Trump’s re-election strategy, the president insists he is “not racist”.

Being racist while saying you are “not racist” is a modern phenomenon of the modern age. It’s the same story on both sides of the Atlantic. Even Boris Johnson’s choice of racist slurs mirrors the Trumpian playbook: when he described Africans as “Aids-ridden”, or published comments about people of Caribbean heritage “multiplying like flies”, connotations of infestation were equally clear.

One of Johnson’s first acts as prime minister was to bring back Zac Goldsmith, whose mayoral campaign even senior Tories denounced, loaded as it was with Islamophobic rhetoric that attempted to link Sadiq Khan to Islamic extremism and crudely stereotyping British Indians. Not only that, but Johnson turned to a key architect of Goldsmith’s campaign, Mark Fullbrook, in his successful bid for the Tory leadership.

That both Trump and Johnson claim to be “not racist” is irrelevant. No one ever admits to being racist any more – Trump, for instance, has gone to the trouble of interspersing his racist Twitter timeline with support for the rapper A$AP Rocky, currently detained in Sweden on an assault charge, and last-minute meetings with inner-city black pastors. Johnson has made plenty of ethnic minority appointments to his new cabinet.

But it’s immaterial, because being “not racist” is a meaningless claim. Neither Trump nor Johnson seems to understand that being “not racist” is not, and has never been, the opposite of being racist. “Not racist” is an attempt at neutrality, usually deployed because events have just shown that no such thing exists. As the author Ibram X Kendi points out in his forthcoming book, the opposite of “racist” is “anti-racist”, which involves taking an active stance identifying and dismantling the legacy of racism that still characterises our societies.

If an anti-racist wanted to unpick this legacy, I can think of few better places to look than Baltimore. The Maryland city has real and chronic problems that are symptomatic of the American story. From the Great Migration of African Americans fleeing the pro-slavery, pro-segregation South in the 19th century, to the 20th-century industries that kept them on low wages, to “redlining” – overtly discriminatory housing practices that pushed black residents into poor, underserviced and marginalised districts – Baltimore is as good a place as any to study the racism that any American leader should urgently address.

It’s hardly news that Trump isn’t interested in addressing poverty and racism, or that he will try to distract those who do. But to racially abuse and dehumanise the citizens who will always bear the brunt of these ongoing failures of leadership – that is a truly squalid thing to do.

Afua Hirsch is a Guardian columnist

1 Dublin farmer discovers overnight rave on his land
2 Three Covid-19 mistakes Ireland urgently needs to learn from
3 Coronavirus: 188 new cases and no further deaths amid concern over eight counties
4 Should I switch bank now with Ulster Bank at risk of closing?
5 Mother and son fined €6.2m over failure to clean up illegal farm dumps
Real news has value SUBSCRIBE