Will France and Germany blink over no-deal Brexit?

Fearing bounce in polls will give Johnson a mandate for hard Brexit, Europe is softening 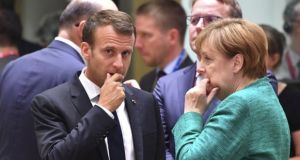 ‘Much of France and Germany’s strategy has been based on the assumption that they’ll never actually have to deal with no deal.’ Emmanuel Macron and Angela Merkel in Brussels. Photograph: Geert Vanden Wijngaert/AP

What Brexit means for the United Kingdom and the life expectancy of Boris Johnson’s government is minutely dissected. What it means for the major EU countries, rather less so.

Things do look more nuanced and interesting when seen from France and Germany – the duopoly that guides the political and economic direction of the EU. This duumvirate has been the motor of the EU since its foundation, in the way it approaches crises such as that in the eurozone (which has unfinished business in the rise of Italian populism) and, now, Brexit.

Declared unity in Europe is always questionable – there are too many faultlines, interpretations, passions and aversions for the harmony to be absolute or unchanging.

Putting aside whether we consider no deal to be an inherently bad idea, it is quite likely to happen

The “Rhine divide” is a term popularised by the Princeton economist Markus Brunnermeier to explain the tensions between France and Germany in the Greek and wider eurozone crisis.

Germany runs a decentralised economy, reflecting its federal status, held together by budget and deficit rules. When those rules look threatened, it prefers tightening belts with austerity and self-imposed constraints. France, a strongly centralised power, allows itself leeway on deficits and in a crisis seeks to spend more to ease the pressure.

You can see the Rhine divide in action as Emmanuel Macron, the French president, increases public spending to buy off the dissatisfaction of the gilets jaunes – pushing public debt to almost 99% of GDP, despite an initial commitment to bringing down borrowing.

In broader eurozone terms, the net effect is a standstill on much-needed reform, and French irritation at the German failure (as Paris sees it) to make a serious commitment to creating a eurozone stabilisation fund to ease the impact of any future crises.

While this festers, the Halloween Brexit deadline looms. For the past couple of months I’ve been touring Europe for a BBC Radio 4 documentary, and my guess is that this summer the major member states will be more engaged in the key decisions on how to handle the threat of no deal.

Until now, they have been happy to leave the pain to Brussels placemen. The timeline and the “Boris factor” are changing the calculation on the continent.

Already, fine-grained differences have emerged. Angela Merkel, the German chancellor, said she was looking forward to a good working relationship with Boris Johnson and hopes Britain and Germany will remain “ bound by close friendship in the future”. Yet France’s Europe minister, Amélie de Montchalin, rejected Johnson’s demand to change the withdrawal agreement.

Putting aside whether we consider no deal to be an inherently bad idea, it is quite likely to happen. Michael Gove, the new cabinet minister in charge of no-deal preparations, made clear in his Sunday Times column that it has become the “premise” of official expectations.

That also changes the way France and Germany will calculate their responses throughout the summer. Much of their strategy has been based on the assumption that they’ll never actually have to deal with no deal – that the UK parliament would never allow it. Now there’s a growing realisation that parliament may not reject this option, and that Brussels will have to face up to the prospect.

With that in mind, the tone from Germany’s government has softened in the past few months. Even the foreign minister, Heiko Maas of the Social Democrats (who tend to be more punitive towards Brexit-y Britain than their Christian Democrat partners), has tweeted that Britain would continue to be “a close partner and friend of Germany”, adding, “Good luck, Boris!”

Sceptics might interpret this as a game of not wanting to be blamed for a no-deal outcome. But if a “Boris bounce” leads the prime minister towards a general election to secure a mandate for no deal, Europe will have to adapt.

This, as far as the new No 10 is concerned, is the inflection point at which those elusive changes to the backstop would provide the final chance to recast the three meaningless votes as a fourth, rather different, meaningful one. Indeed, such a prospect has already provoked the most implacable members of the European Research Group, who fear that the No 10 strategist Dominic Cummings’s plan is ultimately to achieve another deal, rather than the “pure Brexit” of leaving without one.

And across the Channel it throws up a stark Rhine divide choice too. Macron has to date thundered against any extension to the existing deal and suggested that the EU would do better to be shot of difficult Brits than put up with further months of dithering. Senior French politicians are let loose to complain about Johnson’s “posturing”.

The Merkel position, by contrast, reflects her preference for a calm approach when the going gets tough. So even on the backstop she calls for “fresh, creative thinking” – adding in a priceless bit of Merkelese that its present status can only be “overwritten” if an alternative solution is found in the declaration on the future relationship.

Naturally, this can be read as a promise of some readiness to be creative – or none at all. It does not mean that Johnson will inevitably prevail. As a mistress of Louis XIV waspishly remarked, one can be a powerful king with a very small sceptre.

Nonetheless, a Brexit “iron curtain” – in which a rupture in the trading relationship infects other aspects of cooperation – is invidious to both the UK and wider Europe’s interests. Brexit notwithstanding, we have much in common with the great European liberal democracies. It is always possible to make a bad crisis worse, which means that the Johnson era demands fresh reflection – and not only on the home front.

Anne McElvoy is senior editor of the Economist
– Guardian Service