After Islamic State what comes next?

Even if Isis is defeated, the attraction of its ideology is unlikely to disappear 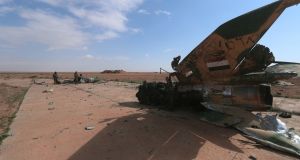 In the summer of 2014, the movement that became known as Islamic State took the world by surprise when it seized the Iraqi towns of Mosul, Tikrit and Tal Afar and advanced to within 60 miles of the capital, Baghdad. In neighbouring Syria, Islamic State, also known as Isis, had taken control of the town of Raqqa earlier in the year and begun to expand the territory under its control. In July 2014, Abu Bakr al-Baghdadi, the group’s leader, made a speech in Mosul, in which he proclaimed the establishment of an Islamic caliphate. The expansion of Islamic State seemed to be unstoppable and commentators speculated on the imminent end of the geopolitical order put in place in Syria and Iraq by the European powers following the end of the first World War.

Yet, in the past two years, Islamic State has been on the receiving end of a series of stunning defeats that have been almost as unexpected as its rapid expansion in the first place. Iraqi government forces are nearing control of Mosul, closing in on the mosque where Abu Bakr al-Baghdadi proclaimed the caliphate. Al-Baghdadi himself is nowhere to be seen and is widely rumoured to have fled the city. US-backed Arab and Kurdish forces are expected to launch an assault on Raqqa expected in the coming weeks. To date Islamic State has lost more than 60 per cent of the territory it seized in Iraq and Syria. Given the extent to which its control appears to be collapsing and the losses that it has incurred, there is now widespread speculation as to what happens if (or when) Islamic State is finally defeated in Syria and Iraq.

Islamic State did not cause the civil war in Syria, but found sanctuary there after the war erupted in 2011

The loss of Mosul and Raqqa would clearly have dramatic implications for Islamic State. On a prosaic level, it has been able to act in state-like fashion in the territories under its control because of the enormous resources it has been able to extract from them. Loss of territory has impacted severely on its finances. According to a recent report from King’s College in London, Islamic State has suffered a significant loss in income since 2014. Income, which comes predominantly from taxes, oil, looting, confiscation and fines, has halved from up to $1.9 billion in 2014 to less than $900 million in 2016. The group’s “economic model” relied on relentless expansion which provided it with new resources to seize and exploit. Conversely, now that expansion has been halted and reversed, sources of revenue are drying up.

However, it may be that the ideological impact of defeat will be greater than its financial impact. Unlike other insurgent or jihadist movements, key to the appeal of Islamic State, both in the region and globally, was the assertion of the existence of a caliphate – the restoration of truly Islamic government on Earth, notwithstanding the rejection of this claim by most Sunni Muslims, theologians and others. The loss of its territory in Iraq and Syria renders the claim of a caliphate – indeed, the legitimacy of the caliph – problematic to say the least.

Nonetheless, even if Islamic State is defeated in the coming months, the attraction of its ideology is unlikely to disappear. This is not least because the expansion of the movement was in significant part a function of structural factors in the region. For example, Islamic State did not cause the civil war in Syria, but found sanctuary there after the war erupted in 2011. It was able to take advantage of the fact that many armed actors engaged in the Syrian conflict saw the battle with Islamic State as secondary to the objective of overthrowing the regime of Bashar al-Assad. Today Syria is divided into a coastal strip in the west that contains most of its population centres and is controlled by the regime, and Kurdish controlled territory in the north along the Turkish border. Islamic State controls territory in the sparsely populated east, while a number of other Sunni Arab rebel groups control territory in the north, south and centre. Some of these have links to al-Qaeda while others have foreign backers, including Saudi Arabia, Turkey, Jordan and the United States. Even in the context of its recent loss of territory, there is limited prospect for the foreseeable future of effective government with local legitimacy emerging in the region where Islamic State operates.

Similarly, Islamic State is not the cause of political instability in Iraq – it is a symptom of it. Its rapid expansion of Islamic State in 2014 was greatly assisted by the dysfunction of the Iraqi government and the collapse of the Iraqi army. The sectarian character of Iraqi political life since 2003 which has seen Shia political forces, led by Nouri al-Maliki, in the ascendancy and the formerly dominant Sunni minority marginalised led some Iraqi Sunnis to fear the government more than they did Islamic State.

Haider al-Abadi, who became prime Minister in August 2014 has attempted to introduce some reforms but has been thwarted by corrupt institutions, obstruction by Maliki and his supporters and the influence of pro-Iranian militias. When in early 2016, al-Abadi proposed constitutional reforms to allow for greater Sunni participation in government, the government’s headquarters were invaded by supporters of Muqtada al-Sadr who temporarily shut the Iraqi parliament down. Yet, if Iraqi political institutions and, in particular, its security sector are not reformed, IS may find opportunity to expand in the country once more.

In the absence of a resolution of the problems of governance in both Syria and Iraq which made the rise of the movement possible, it is likely that we will witness the mutation rather than the end of Islamic State, with the further likelihood that its impact will continue to be felt in the region and beyond.

Dr Vincent Durac lectures in Middle East politics and development in the UCD school of politics and international relations.