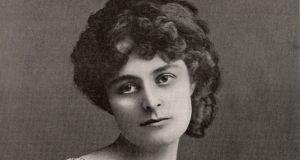 In Yeats Besotted, now running daily at lunchtime in Bewley’s Cafe Theatre, the action starts with WB’s landmark speech to the Senate during the 1925 divorce debate.

This was the one in which he defended his religion and class as “no petty people”, while warning that a divorce ban would only reinforce the new Border.

Then the play has him exiting the chamber in a hurry, leaving behind a diary to be read by his antagonist in the debate, the now-forgotten Cumann na nGaedheal senator Thomas Westropp-Bennett, known as Westropp for short.

The diary contains highlights of Yeats’s famously doomed love life. And noting the scandalous material therein, Westropp quickly overcomes any reluctance to pry, devouring the details with appalled relish and thereby introducing the third character in the play’s triangle, the inevitable Maud Gonne.

It’s a very civilised notion, lunchtime theatre, as I had to be reminded this week when experiencing Bewley’s version of it for the first time in too long. God knows what Gordon Gekko, who thought lunch itself was for wimps, would have made of the concept; although maybe if he (or the real-life fraudsters he was based on) had been more exposed to such things during office hours, it might have had an improving effect.

There used to be a lot more of it around back in the 1980s, if not in Wall Street, then at least in Dublin. Now it’s only Bewley’s that hosts it regularly, as it has done since 1999.

Strictly speaking, for the moment, the venue is not Bewley’s. While the long-drawn-out refurbishment of the Grafton Street cafe continues, so does the theatre’s exile, albeit nearby, down the opposite end of Johnson’s Court, in the stately surroundings of Powerscourt Townhouse. This may present a dilemma if and when the original venue becomes available again, because the current one is twice the size of the original. But that’s another argument.

In the meantime, Yeats Besotted pleasantly reintroduced me to the pleasures of losing yourself for a daytime hour in drama. It also reminded me how magnificently mad Maud Gonne (played by Melissa Nolan) must have been, and why she was so irresistible to “poor Willie”, as she called him.

Dazzled by her imperious ways, the poet (played by Philip Judge) reels heroically under a succession of revelations from his darling, including the one about how she had a love child with an unworthy Frenchman and then, distraught by the infant boy’s death, sought to reincarnate him by seducing the now-estranged father again, but this time in the crypt beside the coffin, a plan that works perfectly until the reincarnated son turns out to be a daughter, Iseult.

This and all other shocks WB absorbs with what grace he can before responding, usually, with another marriage proposal. It is surely not a plot spoiler to reveal that he is always rebuffed. And in this, as Maud reminds him and us, she was doing Ireland a service, because if she had doomed him to happy marriage, he might not have written some of his greatest work.

But in any case, director Cathal Quinn looks elsewhere for a denouement, to the obtuse part of the triangle, the aforementioned Westropp (Sean Duggan). This may have involved some traducement of the real-life senator, about whom I know very little except that he almost certainly didn’t do the thing he is portrayed as doing here.

For purists who would prefer their drama to carry a disclaimer saying “No historical figures were misrepresented in the making of this”, Westropp’s reimagined role may be a liberty too far. The real man, apparently, was a once well-known public figure who lived to be 95. But – sic transit gloria mundi – the producers considered him sufficiently obscure now to be a blank slate. And for all bar historians, they’re probably right.

A related problem is that the Westropp plot-twist is too neat, a bit like the “tightened bow” to which the besotted one compared Gonne’s beauty. Even so, in the matter of simplifying stories, lunchtime theatre may be allowed more than usual dispensation.

Although the shows nominally begin at 1pm, convention demands that audience be given a 10-minute start on the soup and sandwiches. But for those going back to offices, the play still needs to end at 2. So Yeats Besotted is a brilliantly acted summary of a great love affair, with a sub-plot covering three decades of turbulent Irish history, all done in 50 minutes. And to paraphrase the man himself, that’s no mean feat.