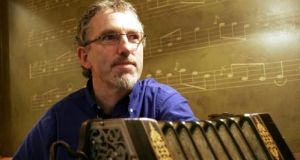 Noel Hill: kicked in the head so hard that his left eye socket was pushed into his skull. Photograph: noelhill.com

The fame of Noel Hill in Irish traditional music circles had earned him at least two notable mentions in song. One was on Christy Moore’s comic masterpiece Lisdoonvarna, a tribute to that town’s late, lamented music festival and, more generally, a cultural census of Ireland circa 1983. The aforementioned concertina player is name-checked in the first verse, amid a Clare who’s who: “Micho Russell, Doctor Bill/Willie Clancy, Noel Hill”.

A few years later, Hill was further immortalised – this time satirically – by the Pogues. The London-Irish band’s shotgun marriage of punk and trad was itself an extended joke, although not everyone laughed.

The concertina virtuoso was horrified by what they were doing to a tradition he loved, and said so.

In revenge, the Pogues wrote a tune in his honour, Planxty Noel Hill.

But Hill’s sensitivity about Irish music made him what he is.

Those best qualified to judge – including his fellow Clar– eman, the great accordion player Tony MacMahon – liken his performances to a kind of of religious “ecstasy”, as if he’s channelling spirits instead of just playing notes. It’s not just Hill you’re listening to, it’s his musical ancestors.

It was this same intense connection with heritage that persuaded Hill, a Gaelgeoir, to make a fateful mid-life move, with his children, to Connemara, a place he once thought of as “paradise”. This followed the break-up of his marriage.

But there was another rationale, typically earnest, behind the migration. He had been listening to radio death notices, in Irish, and was struck by the sad thought that these natives of the Gaeltacht would not be replaced. So his move to west Galway was like that of a soldier, volunteering for the front to take on the mantle of the fallen.

It was all the more shocking, therefore, when one night in 2008 his Connemara idyll ended in a moment of alcohol-fuelled violence.

At the time, he had been in legal dispute with his builder: a not unusual occurrence in construction. But this was St Stephen’s Day and Hill was relaxing with friends in a local pub, when his life changed forever.

During the course of about “40 seconds”, prostrate on a toilet floor, he was kicked in the head so hard that his left eye socket was pushed into his skull, “like an egg in an eggcup”.

Of the moments that followed, his life in the balance, he recalls an out-of-body experience in which he looked down on his prone self. He also saw his father, whose death had been a tragedy of Hill’s younger life.

He believes it was his father’s voice, telling him it was not time to die, that saved him. Otherwise, he says, “I wouldn’t be here today”.

Hill describes this and its aftermath in a new documentary, Aisling Ghéar, which makes its television debut on TG4 next week.

It will make uncomfortable viewing in Galway because, although a protracted court case over the assault ended in 2015, with the culprit jailed for seven years, Hill has clearly not achieved closure.

He continues to live in Connemara, uneasily.

After the multiple operations that reconstructed his skull, and the depression that came with recovery, rendering him unable to leave the house, never mind play music in public, the ordeal should have ended with the conviction. It didn’t.  Hill speaks of lingering hostility in the area. “It’s not paranoia”, he insists: there is tangible resentment against “that Clareman”, because of whom “one of ours has gone down”. By the documentary’s end, it is clear to him – and will be to viewers – that he needs to leave and draw a line under what he realises was a terrible mistake.

That dark sub-plot aside, the film is also unusual in being a feature-length documentary about an Irish traditional musician.

On a happier note, it also deals with his childhood and how he first came to choose the concertina, or vice versa.

He would rather be an uilleann piper, he admits, but it was through studying and emulating great pipers and fiddlers that he brought the less fashionable “box” to a national stage, making him, in the words of Stephen Rea, another contributor to the documentary, “the Jimi Hendrix of the concertina”.

Produced by Edel Fox, herself a box player and Hill protégé, Aisling Ghéar was first shown at the Irish Film Institute in January. More recently, it screened at the Boston Irish Film Festival.

It will be broadcast on TG4 next Wednesday, at 9.30pm.