The problem with Shane MacGowan 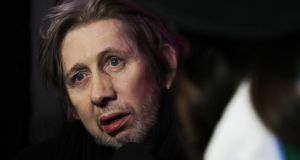 Back in the 1980s, an RTÉ crew interviewed me in Amsterdam, where I’d already been living for a few years, for a segment on the Irish diaspora. When the interview was over, I went on to speak enthusiastically to the director about my newest discovery, the recently released Pogues album Rum, Sodomy and the Lash. I had been listening to with keen interest, as it seemed to capture something of the essence of the Irish emigrant experience. Beneath the punkish clatter, Shane MacGowan’s lyrics displayed a sophistication and ambition rare in the Irish music and literature of the time, particularly in songs such as The Sick Bed of Cuchulainn, and I loved the way Yeatsian romanticism was blended with the seedy underbelly of London. But the director wasn’t impressed. “The Dirty Irish,” he sneered, “The Brits love it, of course.”

This is an attitude to MacGowan I would continue to encounter over the years in some sectors of Irish society. The new documentary on his life, Crock of Gold, has been well received abroad, but in Ireland there has often been an element of dismissiveness and distaste when discussing MacGowan. I believe this attitude can be explained only in terms of an ongoing buried trauma and shame related to Irish emigration over the last century and its consequences.

In this decade of centenaries, we should continue to acknowledge the obvious and painful truth that the existence, never mind the success, of the Irish State was predicated on mass emigration, one of the injustices, after all, which Irish independence was intended to end. The problem with MacGowan is that he seems to hold up a mirror to the worst aspects of Irish emigration, the ones we would rather forget. MacGowan is not a one-off. In Britain, the world of entertainment, publishing and media is full of the children of first- and second-generation Irish immigrants, what the brilliant Anglo-Irish poet Ian Duhig calls the hyphenated people. We insist on regarding them as British, because anything else would cause us too much cognitive dissonance. It is hard to celebrate the State while considering its failure.

They, on the other hand, are often all too aware of their hyphenated identity, and the Plastic Paddy syndrome. They are aware that their parents and grandparents left as refugees from an economic and social disaster. It cannot be whitewashed as a vibrant generation seeking new challenges abroad. Many left with little education or qualifications, bad teeth and a cardboard suitcase, and the painful awareness that they would probably not return. The Irish State had failed them.

We all grew up with the Love Actually-style scenes at Dublin Airport, as shiny young people returned for Christmas, but we must be aware that they are trailed by a huge ghost army of those who never came back, Ireland’s disappeared. Though not entirely disappeared. Recently strolling down that old main drag, Kilburn High Road, I stopped outside a funeral director’s premises to look at a poster showing the island of Ireland, discreetly colour coded into four provinces, which proudly offered “repatriation to all parts of Ireland”. Yes, once you die, we’ll take you back – if you can pay for it.

Despite the constant lip service, it is clear that Ireland has never fully embraced its diaspora because of the shameful memories it brings with it, as well as awkward political aspects in the present related to extending the vote to emigrants. And of course, MacGowan writes about the wrong kind of Irish: drunks, rent boys, punks, brawlers, jailbirds. In other words, the racist caricatures which were imposed on us in the United States and Britain over the last centuries. It has always seemed interesting to me that the stock racist images that are found in some parts of Irish society of Irish Travellers – drunk, fighting, feckless, with far too many children – seem identical to the racist images once applied to the Irish as a whole. Do Travellers remind us too much of ascribed aspects of ourselves we’d rather forget?

Certainly, this new Ireland prefers it cultural icons to be Dacent Irish Bhoys (and Girls): well-educated, polite, and above all, middle class. It’s as if we want to get as far away from the old image as we can. The begrudging Irish attitudes to Brendan Behan, a man of immense achievement, seem to be caused by the same syndrome.

Given all this, attitudes to MacGowan come as no surprise, despite the fact that his songs have real value, and are a vital part of the story of this country. But MacGowan in all his flawed glory is a constant reminder of the guilt and trauma of an episode we have yet to fully confront.