Africa turning its back on International Criminal Court 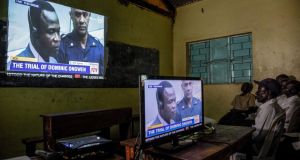 People watch on TV the screening of the start of the ICC trial of former Lord’s Resistance Army commander Dominic Ongwen who is facing charges of war crimes and crimes against humanity in Uganda. Photograph: Isaac Kasamani/AFP/Getty Images

The world’s first permanent war crimes court, the International Criminal Court (ICC) was established in 2002 in The Hague, with 122 countries signing up to its founding document, the Rome Statute. Its founders called the ICC a “victim’s court”, victims can be heard by judges at all stages of proceedings.

All but one of the ICC’s investigations have been in Africa, but African countries are turning their back on the court. South Africa, Burundi and Gambia have announced their intention to withdraw. Namibia and Kenya are also said to be considering withdrawal, as is Uganda.

I’ve spent several years working in African countries involved in trials at the ICC; it’s very common to meet people who tell you that the ICC is picking on Africans.

In fact, the African cases at the ICC have been instigated at the request of African governments themselves: Central African Republic, Côte d’Ivoire, the Democratic Republic of the Congo (DRC), Mali and Uganda. Other cases were referred by the UN Security Council, while a case against Kenya is the only one initiated by the prosecutor (it was subsequently dropped).

But the perception that the ICC is against Africans is one that political leaders are exploiting. Gambia’s minister of information Sheriff Bojang has referred to the ICC as the “International Caucasian Court” on state television.

The ICC needs to prosecute more cases beyond Africa, but it also needs to

ensure that communities affected by war crimes being judged in The Hague are fully informed about proceedings, albeit thousands of kilometres away.

The court’s first case opened in 2009. Thomas Lubanga was charged with the war crime of enlisting and conscripting children under the age of 15 and using them to participate actively in hostilities in Ituri province, in DRC. 129 victims participated in the trial in The Hague.

The ICC did some outreach about Lubanga’s trial in Ituri, showing communities video clips of proceedings. I heard a number of concerns from human rights activists when I visited DRC: why was Lubanga taken to The Hague to face justice, while other militia leaders did not face trial? There was also disappointment that the charge of sexual violence had not been allowed against Lubanga, despite considerable evidence.

In 2012, Lubanga was found guilty and sentenced to 14 years. But the court did not broadcast the verdict to communities in DRC. Victims had a long wait to hear if they would receive compensation for his crimes; reparations were awarded in October of this year, drawing on the Trust Fund for Victims.

A 2015 study by the Human Rights Centre at the Berkeley School of Law found that victims were more concerned with reparations than participation in court proceedings in The Hague. The report recommended speeding up trials and more ICC staff in the field to inform communities about proceedings in The Hague, including victim participation and reparations.

The ICC’s most recent case opened this month. It involves the former Lord’s Resistance Army commander Dominic Ongwen on trial for war crimes and crimes against humanity in Uganda. Ongwen is facing 70 charges including “forced pregnancy” and “forced marriage”.

The ICC is, for the first time, providing live relays of proceedings in The Hague for Ugandan television and radio, and in schools and halls around the north of the country. Community members are attending screenings in large numbers, radio shows have followed up with debates and talk-back programmes. Justice in far-away Europe has been brought closer to Ugandan communities who were brutalised by the Lord’s Resistance Army.

It is early days for Ongwen’s trial but the ICC is laying the groundwork for better understanding about the workings of the court and clearer expectations about the ICC’s contribution to peace and justice in the marginalised north of the country.

The ICC embodies the global fight against impunity. Article 27 of the Rome Statute states: “This Statute shall apply equally to all persons without any distinction based on official capacity.”

In July this year, the African Union sent the ICC a series of demands, including one calling for immunity from prosecution for sitting heads of state and other senior government officials. The case of Sudanese president Omar al-Bashir is key, he was indicted by the court in 2009; in 2015, he managed to visit South Africa, despite a high court order for his arrest. Al-Bashir has urged other African states to follow South Africa’s example of withdrawing from the ICC.

Namibia’s president Hage Geingob told Reuters recently that his country’s support for the ICC would continue, so long as the US joins the ICC too.

It’s hard to imagine US president-elect Donald Trump signing up to the ICC. But the ICC’s prosecutor, Fatou Bensouda (a former minister of justice in Gambia) has signalled an interest in opening investigations into war crimes, including torture, by US military forces in Afghanistan, in her annual report published in November of this year.

Afghanistan is a member of the court, so these allegations – irrespective of the nationality involved – can be investigated. Such a move would go a long way towards countering the anti-imperialist rhetoric of African leaders, and ensuring that victims of war crimes and crimes against humanity around the world can continue to count on the ICC as a court of last resort.

Louise Williams works as a journalist and human rights campaigner and is an LLM graduate from the Transitional Justice Institute in Belfast.