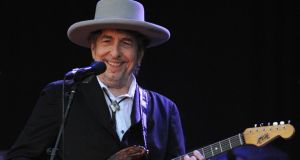 Bob Dylan fans and Irish nationalists may be equally excited by news of his latest album, Triplicate, out next week. It continues his recent exploration of the Great American Songbook. And as the title suggests, it’s a triple-disk collection, the first of his career.

But it’s also notable in that each of the three records is 32 minutes long, give or take seconds: a fact he considers important.

In this country, of course, the number 32 has almost mystical significance. It’s considered so holy in some quarters that it may not be written in public. Hence those equations you see daubed on walls: “26 + 6 = 1”.

It turns out that Dylan too sees it as “the number of completion”, although in this, he probably wasn’t thinking of Ireland.

He made the comment in a rare Q&A posted on his website this week, when it was put to him that he could have fitted the collection on two CDs. Asked if there was something about the “32-minute length” that appealed to him, “completion” aside, he also claimed it to be “a lucky number” and “symbolic of light”.

He could also have noted that an adult human has 32 teeth (wisdom again included); that 32 is the freezing point of water at sea level in degrees Fahrenheit; that there are 32 squares of either colour on a chess board; and that 32 is officially a Magic number, being the LA Lakers shirt worn by Magic Johnson and now, like him, retired.

Back in the days of vinyl, he explained, there was a strong relationship between the length of a record and its sound quality.

Put crudely, the more songs you tried to fit on either side of an LP, the poorer the sound had to be, although the type of music was a factor too.

Bass notes, for example, required deeper (and therefore wider) grooves, so you could fit fewer of those in. But in general, anything more than about 18 minutes a side was a challenge for sound engineers. And of course, in his heyday, Dylan continuously produced albums much longer than that.

As he says in the interview: “The sound was thin and you would have to turn your record player up to nine or ten to hear it well. So these CDs [Triplicate] represent the LPs that I should have been making”.

In other words, he’s doing things correctly now, when it doesn’t matter any more (or as much).

But then this is in keeping with his latter-day homage to Frank Sinatra, and the aforementioned song-book. Which, as he also explains, he only feels qualified to sing having first lived it.

Hardened Sinatra fans might still question Dylan’s qualifications to cover such songs as The Best is Yet to Come, given that his voice is so hoarse these days it makes Ol’ Blue Eyes sound like Farinelli the Castrato.

Traditionalists may prefer the likes of Michael Feinstein who, as it happens, is in Dublin tonight, for a Sinatra-themed show at the National Concert Hall. The timing of this is in its own way interesting, because one of Sinatra’s former wives is also in the city this weekend, for a public interview tomorrow. Of Mia Farrow’s past relationships, the one with Woody Allen is now most infamous. But this year is a sort of rolling 50th anniversary of her first marriage, to Sinatra, which lasted a year.

Meanwhile, getting back to the man we might call a Special Envoy for the Great American Songbook”, Dylan made only one, oblique reference to our 32 counties in his interview. Asked what singers he admired, he mentioned “Imelda May”. And speaking of Mays, he will himself be in Dublin on the 11th of that month, for the latest Irish instalment of his “Never-Ending Tour”.