A peculiar bourgeois nationalism brings Spain to the brink 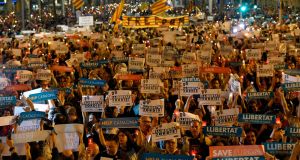 A demonstration in Barcelona against the arrest of two Catalan separatist leaders. Photograph: Lluis Gene/AFP/Getty Images

There is a whiff of first-world self-indulgence about the clamour for independence in Catalonia. A movement that does not have the support of a majority of Catalans is concentrated in the middle and upper middle classes of one of the European Union’s richest regions. Catalans enjoy a high degree of autonomy already. They are not an oppressed minority: they are not subject to arbitrary arrest by a predatory state. They are free to express their political opinions, including separatism. They speak their own language unhindered, and they express their vibrant culture uninterrupted.

Now an element of martyrdom has been added to that self-indulgence by the disgraceful and bewildering response of the government of Spanish prime minister Mariano Rajoy to the holding of the referendum on Catalan independence on October 1st. Nearly 800 people were injured in clashes between voters and the armed Spanish national police force. The crackdown was not just on voters, but on the act of voting itself. The Guardia Civil stormed polling stations, seized ballot papers and cut off internet access to the organisers.

All of this took place in Barcelona, one of Europe’s most civilised and beautiful cities, and was broadcast around the world. It was a gift to the Catalan nationalist cause. Madrid’s heavy-handed opposition to the holding of the referendum may yet help to deliver the very outcome it was aimed at preventing: the secession of Catalonia from Spain.

The contrast with the conduct of Scotland’s referendum on independence in 2014 is striking. The right of the Scots to have a vote on their future in the UK was recognised from the start; the government in London used only its powers of persuasion – admittedly very late in the day – to convince them to stay. Scottish nationalists lost that vote by 55 per cent to 45 per cent on an exceptionally high turnout of voters, but nobody disputes that they can try again another day, and almost certainly will.

This contrast is crucial to understanding the Spanish stand-off. The battle for hearts and minds in Scotland is fought between Scottish nationalists and British unionists. In Spain, on the other hand, there is a sharper dividing line. The Spanish confrontation is a clash between two competing nationalisms: Catalan and Spanish. The UK’s eventual extinction is inherent in its devolution settlement – not just Scotland but Northern Ireland is free to leave if a majority choose to do so. Spain, however, is not a “union”; it is constitutionally and historically one state. That makes the Catalan-Spanish clash all the more bitter, and will complicate the search for an agreed solution.

Spaniards suffered badly in the past decade from the effects of the global financial crisis and home-grown economic problems. Yet Spain is in many ways an exemplary modern nation. It is ethnically and culturally diverse, decentralised, and open to immigration, with a high quality of life and a sophisticated culture admired around the world.

The puzzle is why the government of such a seemingly secure nation should react so crudely to an exercise in popular democracy being staged in pursuit of a cause that every opinion poll suggested its backers were going to lose. True, some 90 per cent of voters in the referendum backed the separatist cause. But turnout was just 43 per cent. Carles Puigdemont, the Catalan president, has clouded the outcome further by fudging a declaration of independence, which would have been entirely illegitimate. One has to ask, in the circumstances, what Mr Rajoy and his government were afraid of.

One answer to that question is that the Catalan-Castilian dynamic now completely dominates Spanish political discourse, sharpened by the economic crisis of the last decade. Catalonia is home to 15 per cent of Spain’s population, but it produces around a fifth of the country’s economic output. That has fed an outsized sense of grievance among the Catalan middle classes, who fret that their money is subsidising less productive Spaniards. But that grievance could be addressed with a fairer distribution of the economic spoils. Constitutional reform that would give all of Spain’s regions greater autonomy, particularly over financial matters, now looks essential if the clash over Catalonia is to be resolved without resorting to the nuclear option.

The Catalan-Castilian dynamic is not just over money. It is also, in part, about identity. The absurdly overblown build-up to every meeting of the Barcelona and Real Madrid football teams is just one example, although the most familiar around the world, of how the clash between Catalonia and Spain is infecting Spanish life to the point where it has become unavoidable and overbearing.

Despite its achievements over the centuries, Spain sometimes gives the impression of being paralysed by self-doubt. This is particularly true of its sense of its place on the world stage. The Spanish voice is rarely heard in the corridors of global power, including in Brussels. French and German leaders tend to look to Italy on the rare occasions when they feel the need to consult a third party; Poland is arguably a more influential EU member state than Spain.

For all its bourgeois trappings, Catalan nationalism is a legitimate political force. The challenge for Madrid and Barcelona is to ensure that it does not tear Spain apart. The country faces its gravest constitutional crisis for four decades. We must hope it has the maturity to resolve it.