Even if emissions are stabilised through international agreements, worst effects of global warming have yet to be experienced 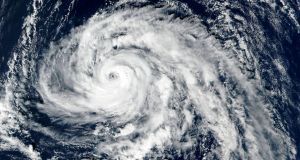 Taoiseach Leo Varadkar warned of a “national emergency” as the remnants of Hurricane Ophelia battered the country yesterday. After years in which successive governments have failed to implement their commitments to cut greenhouse gas emissions, it represented a statement of the blindingly obvious. Global warming and extreme weather events, with all their destructive consequences, have become a harsh reality. Rather than merely ringing alarm bells when these events strike, the Government should take what corrective action it can.

Administrative arrangements have been made to contain likely damage and to advise communities facing extreme weather events. They represent an advance, but they are reactive in nature and do not address causative issues. Met Éireann plays a central role in advising the National Emergency Coordination Group on potentially dangerous events. In the case of Ophelia, it was able to give three days’ notice of its trajectory and the resulting warnings almost certainly saved lives.

Based in the Department of Housing, the coordination group consults with the Defence Forces, emergency services, local authorities and other departments on necessary preparations for threatening weather events. It coordinates responses and clean-ups in the worst affected areas. Because of inadequate warning, however, it is usually a reactive process. Earlier this month the Government finally agreed to fund a Met Éireann service, designed to predict where flooding is likely to occur following extreme rain events. It will take time to modernise what Dr Gerald Fleming of Met Éireann described as the existing “primitive” system. But it represents an important initiative in providing an early warning system.

Extreme events, involving storm surges, flooding and destructive winds, have become a greater part of everyday life as the climate warms. The situation is likely to worsen, according to Prof John Sweeney of Maynooth University. Even if emissions are stabilised through international agreements, he believes the worst effects of global warming have yet to be experienced.

This dismal prediction places a responsibility on Government to prioritise the long term national interest and to protect future generations. On present trajectories, Ireland will miss its carbon reduction targets for 2020 and, perhaps, for 2050. Transport and agriculture are the main offenders in that regard and the State is likely to face large EU fines as a consequence. Talk of dredging the Shannon and other rivers is a diversion. Soft engineering measures, designed to slowly release water, are more effective. But more fundamental action, involving higher carbon taxes, phasing out fossil fuels in transport and ending peat subsidies for electricity generation, would establish the Government’s credentials on global warming.

1 Trump threatens to ‘close down’ social media companies after Twitter fact-check
2 Michael McDowell: We will laugh at the puritanism of the two metre advice
3 O’Leary’s call for easing of flight restrictions criticised by health experts
4 Coronavirus: Denmark is reopening society quickly. How is it faring?
5 Sil Fox tells of ‘months of hell’ as he is cleared of sex assault on woman in bar
Real news has value SUBSCRIBE