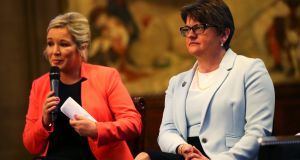 Because of the intransigent negotiating positions of both the Democratic Unionist Party (DUP) and Sinn Féin towards the re-establishment of an Executive, the people of Northern Ireland are being denied the benefits of a properly functioning government. Tribal politics and sectarian-style considerations are threatening to overwhelm the commitments to peace, diversity and compromise that formed a basis for the Belfast Agreement.

It does not have to be like this. Northern Ireland’s leading parties have more to gain fromcompromise than they have to lose. After all, they were elected to provide stable and effective government by their constituents. Instead of shouldering these responsibilities, however, the major parties have retreated into sterile nit-picking over what might constitute an acceptable compromise on language legislation.

Last week, it seemed that agreement might be reached. Both DUP leader Arlene Foster and Sinn Féin’s leader in the North, Michelle O’Neill, appeared willing to fudge some of their more intransigent statements. But elements in both parties were less amenable to this approach and stalemate followed. A lack of trust has infused relations between the parties, and while Foster and O’Neill are believed to have established an improved working relationship, much remains to be done.

Time is running out. Northern Ireland Secretary James Brokenshire has allowed the parties three weeks in which to resolve their differences and form an Executive. He told a House of Commons committee yesterday that, if they fail, he will be “forced” to impose a budget on Northern Ireland. Such a development, he added, would represent “a glide path towards greater and greater UK government intervention”. Earlier, in the context of Brexit, a senior civil servant declined to rule out a return of British troops to the Border.

Instead of concentrating on the issues that divide them, the DUP and Sinn Féin should consider the needs of their constituents. Recent cuts to health services and education, amongst other matters, will have long-term consequences unless they are addressed. A functioning Executive would be in a position to disburse additional funding secured by the DUP in return for its confidence-and-supply agreement with the British government. That would provide an important impetus for an under-achieving economy with a growth rate of one per cent.

Further delay and political stalling will encourage extremists in both communities who peddle the language of division and strife. Peace should not be taken for granted. While it has transformed Northern Ireland, it remains a vulnerable construct. The parties have a responsibility to protect it, and that requires them to bend their positions to reflect the greater good.