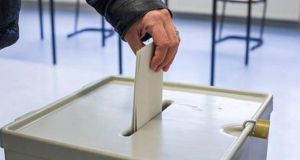 The UK’s first-past-the-post electoral system allows a cohesive minority to win out over a fractured majority. Photograph: Getty Images

With a Northern Irish Border poll and referendum on Scottish independence on the cards in coming years, political stability in the UK and in Ireland may well depend on how the political systems manage the taking of highly emotive political decisions in binary Yes/No referendums.

The outcome of the Brexit saga shows that the British authorities need to give urgent consideration to how the use of referendums can be reconciled with the UK’s unwritten constitution and first-past-the-post electoral system.

The Brexit process has provided an example of how such a process should not work.

In Ireland, any proposal to leave the EU would have had to have been given concrete legal form in a proposed amendment to the text of the Constitution that would then have been voted on in a referendum.

Because of the unwritten nature of the British constitution it was not necessary to set out the precise legal form that Brexit would take in advance of the referendum. Instead the electorate was required to take a vague in-principle decision to leave the EU without any specific details as to what legal form this would take.

Strikingly, proper debate on the precise legal form that Brexit would take began only after the referendum. The result was endless debate about what the British people had meant by their abstract decision to leave the EU.

This debate has now been resolved by the decisive victory of Boris Johnson’s Conservatives in the recent general election.

Unless Johnson dramatically abandons his manifesto promises, his parliamentary majority will deliver a relatively hard form of Brexit for the UK, involving significant loss of access to the EU single market.

This model of taking a vague in-principle decision in a referendum and then using an election to choose the specific form the decision will take has meant that the UK will embark on a form of Brexit considerably more extreme than most British voters actually want.

The UK’s first-past-the-post electoral system allows a cohesive minority to win out over a fractured majority. Although the Conservative party’s manifesto commitment to a relatively hard form of Brexit won them over 56 per cent of the seats in the House of Commons, parties committed to either a second referendum or to cancelling Brexit altogether won 51.5 per cent of the votes cast. One lesson from this ought to be that the British system needs to change its approach to referendums.

Holding a vague in-principle vote and then relying on a first-past-the-post system to give specific form to that vote risks allowing electorally cohesive but unrepresentative minorities to impose their will on the more moderate majority.

A solution would appear to be to require that the precise form of constitutional change proposed be set out in advance of any vote.

After all, if Scotland is to become independent or Northern Ireland is to unite with the Republic, voters are entitled to full information on the form that a united Ireland or an independent Scotland would take before casting their votes.

The problem is that, as with Brexit, Irish unity or Scottish independence would require detailed negotiations on the economic and institutional details.

It is hard to see either the DUP or British government engaging in such negotiations before a referendum lest concluding a decent deal would encourage voters to opt to leave the UK.

It will, therefore, likely be impossible to provide voters with detailed information in advance of a referendum vote.

One could have a two-referendum process where an in-principle decision triggers detailed negotiations whose outcome is then subject to a confirmatory referendum.

However, this may not overcome the problem. The UK government or the DUP may be tempted to take a very hard line in post-referendum negotiations in the hope of triggering a negative vote in the confirmatory vote. There are no easy solutions, but the status quo is not an option. The UK’s uncodified constitution meant that Brexiteers were able to win majority support for Brexit without spelling out what Brexit would mean.

Worse, an electorally cohesive minority managed to use the first-past-the-post system to impose a form of Brexit that would never have obtained a majority in the referendum, and which was rejected by a majority of voters in the election.

Given the history of conflict these issues are particularly pressing in relation to a Border poll. A vote on Irish unity will stir emotions and raise fears. If these fears are to be managed and instability avoided, it will be necessary to devise systems and procedures to reassure voters that the process will not be hijacked by unrepresentative groups.

As the Brexit process has shown, the UK currently lacks any such procedures. Political stability in Ireland and Britain may depend on finding them.

1 52 places to go in 2020: Here’s where the New York Times says you should visit
2 Taoiseach claims Sinn Féin not ‘a normal political party’
3 Who are Ireland’s 17 billionaires?
4 Yacht captain guilty of drunk sailing had ‘God given right’ to be on Liffey
5 Over 65s are expected to ‘crawl into corner and die’, says election hopeful Valerie Cox
Real news has value SUBSCRIBE