Nature will have the last word on the climate crisis 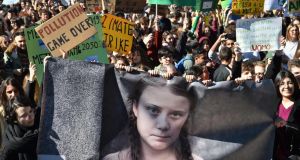 “The flicker of hope for real system change ignited this year by the international school strike movement and the street activism of Extinction Rebellion among others has been snuffed out by the politicians, policymakers and corporate lobbyists in Madrid.” Photograph: Andreas Solaro/AFP via Getty Images

The climate crisis, according to Nobel laureate economist Joseph Stiglitz, “is our third World War. It needs a bold response.” And, after decades of political gesturing and public apathy, 2019 may be remembered as the year the world began to fitfully awaken to the deadly threat of ecological collapse.

The ripples of awareness are spreading quickly. The Collins dictionary chose “climate strike” as its word of the year, while the Oxford English dictionary plumped for “climate emergency”. Meanwhile, teenage activist Greta Thunberg has become Time magazine’s youngest ever person of the year.

After a decade and more campaigning on this issue, I should be feeling elated that the message is finally breaking through. Instead, I remain haunted by HG Wells’s description of history as being a race between education and catastrophe. And, on the eve of 2020, it hardly feels like we’re winning.

The flicker of hope for real change ignited by the school-strike movement and Extinction Rebellion has been snuffed out by politicians, policymakers and corporate lobbyists

First, the politics. The recent Intergovernmental Panel on Climate Change (IPCC) COP25 meeting opened with the direst of warnings from United Nations secretary general António Guterres: “Humanity is knowingly destroying the planetary support system.” Despite this, it ended with a whimper in Madrid earlier this month. “Make no mistake, this was a failure of epic proportions,” said Irish climatologist Prof John Sweeney.

The IPCC was first convened in the early 1990s to tackle the threat of dangerous climate change, yet in the quarter century since its inception, global CO2 emissions have actually doubled. Soaring rhetoric has consistently crumbled in the face of a reality in which politics is beholden to powerful interests and bewitched by the imperative of endless economic growth.

“Ruin is the destination toward which all men rush, each pursuing his own best interest in a society that believes in the freedom of the commons,” ecologist Garret Hardin presciently wrote in 1968. “Freedom in a commons brings ruin to all.”

The flicker of hope for real system change ignited this year by the international school-strike movement and the street activism of Extinction Rebellion, among others, has been snuffed out by the politicians, policymakers and corporate lobbyists in Madrid.

Nature, however, will have the last word. The Arctic region is now warming so rapidly that it is releasing more than a billion tons of CO2 annually from melting permafrost – this is equivalent to the total emissions for Japan and Russia combined.

Equally dramatic has been the precipitous decline of Arctic sea ice, which has been shrinking at the rate of more than 10 per cent a decade since the 1970s*. An ice-free Arctic in the summer is now within sight, with profound climatic consequences for the entire northern hemisphere, including Ireland.

The vast Greenland ice sheet is melting seven times more quickly than in the 1990s, dumping more than 250 billion tonnes of melt water into the north Atlantic annually. Unsurprisingly, 2019 has been confirmed as the second-hottest year on record. All five hottest years have occurred since 2015.

Ireland’s politicians were caught off guard by the force of street protests this year ... the response remains anaemic

In just the first six months of 2019, extreme weather displaced a record seven million people worldwide. Higher temperatures have fanned epic fires this year, from the Amazon to California, Africa, Australia and even sweeping the boreal forests of Canada and Siberia. Among the areas hit by mega flooding events this year were India, Mozambique, Japan, the Philippines and the US midwest.

Earlier this month fund managers Legal & General warned of an “unparalleled climate catastrophe” this century, with between one billion and two billion people being exposed to fatal levels of heat and humidity. “The next 10 years are going to decide what sort of climate outcome we end up with,” said analyst Nick Stansbury.

Many have already decided. Oil titan Saudi Aramco was recently floated, with a share value of $2 trillion, making it the most valuable company on Earth. What are the odds of this vast fortune remaining unburned to preserve the global commons?

Unearned wealth of this kind is also blatant intergenerational theft. To prop up the present bubble of affluence for some, corporations consume "unpriced natural capital" worth $7.3 trillion a year, leaving a bitter legacy of unmanaged emissions, unmanageable pollution and gravely degraded biodiversity for all future generations.

Ireland’s politicians were caught off guard by the force of street protests this year, and have since been scrambling to catch up. The rhetoric has certainly improved, but between system inertia and constant lobbyist pressure, the response remains anaemic.

I have spoken with groups all around the country this year and, for the first time, am routinely encountering anxiety, bordering on panic. And people are right to be afraid. If you are still feeling calm about the climate emergency, you simply haven’t been following the science.

Politicians and their advisers want you to believe we can tackle this existential crisis through small, painless personal behavioural nudges, while knowing this is patent nonsense.

The changes required will be wrenching, both at an individual and at a system level. Radical decarbonisation will mean rationing and restrictions only ever seen in wartime. The public may come accept this once it truly grasps that the alternative is collapse and ruin.

Welcome to the radical new politics of the 2020s.