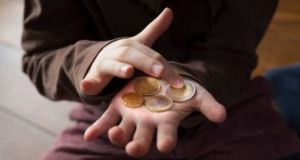 A pilot to provide free school meals for children in early learning centres will be announced by Minister for Children Katherine Zappone on Thursday.

Funding of €160,000 is to be allocated for the pilot in 45 childcare settings next year.

“The focus of pilot meals programme will be children enrolled on the ECCE [Early Childhood Care and Education] programme. The pilot will operate for the full duration of the 2020/21 ECCE Programme year (ie 38 weeks from September to June) and will be subject to a full evaluation,” says the note.

Free meals for children are a recognised, targeted intervention to tackle child poverty, and this comes in addition to the hot meals pilot running this year in 36 primary schools under the auspices of the Department of Social Protection.

Welcoming the extention of free meals, Tanya Ward, chief executive of the Children’s Rights Alliance, said all the evidence showed that children in families in poverty benefitted emotionally, educationally and physically when provided with a free, nutritious meal during the school day.

The move comes amid ongoing pressure from both the European Commission and the United Nations on Ireland’s child poverty rates – 18.4 per cent of children are at risk of poverty, while 9 per cent are in consistent poverty.

The “qualified child allowance”, paid in respect of children whose parents or guardians are dependent on welfare, will go up by €3 a week for over-12s to €40, and by €2 for under-12s to €36.

The income a single parent may have while still qualifying for the One Parent Family Payment or the Jobseeker Transitional Payment is increasing by €15 a week, from €130 to €145.

A pilot scheme to provide free school text books was welcomed by groups including Barnardos, the Society of St Vincent de Paul and the CRA, though there was disappointment that the capitation grant rate was not restored to 2010 levels for primary and second level education.

Many such groups, echoing the European Commission, sounded a warning that a failure to address child poverty would cost not only the children, often for the rest of their lives in terms of lost potential, but the economy too.

Failure to invest in frontline services needed by children is known to contribute to increases in obesity, drug and alcohol abuse, crime and violence against children.

An additional €54 million announced for the National Childcare Scheme was greeted with disappointment by both providers and those working in the sector. It was seen as neither enough to address the legacy of huge underinvestment, nor enough to address low pay – the average wage is about €11 an hour – and difficulties in recruiting quality staff.