Why western liberalism is in big trouble

Threat to western idea of progress comes from within, a new book argues 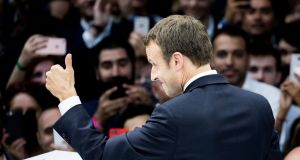 In much of the world, if you take a long view of the trajectory of human progress, things are looking pretty good just now. Poverty is falling at a faster rate than ever. The child mortality rate has reduced by more than half in the past 25 years, and the son of a peasant farmer in sub-Saharan Africa today can expect to live a decade longer than his parents. Across the developing world, in Asia in particular, the dramatic growth of the middle class is set to be the story of the century. By 2050, China’s economy is likely to be twice the size of America’s and larger than all the western economies combined.

Viewed from the United States or Europe, however, the outlook is a lot bleaker. It turns out that the West’s middle classes are the biggest losers in the rapidly converging global economy. With the exception of a few years in the 1990s, the trend has been towards stagnation and decline. The median blue-collar hourly wage in the US is the same in real terms today as it was in 1969, and while inflation is nominally at zero, the price of the things people need to survive and thrive, such as healthcare and third-level education, is soaring by 15-20 per cent a year. The pressures of globalisation and automation are such that the US, which traditionally had the highest class mobility in the West, now has the lowest, meaning America is one of the last places you can expect to realise the American Dream.

If the western middle classes feel they are losing out, in other words, it’s because they are.

These insights are central to the thesis put forward by Edward Luce in his excellent and timely new book, The Retreat of Western Liberalism. While we tend to think that values are what bind our democracies together, Luce argues, the real glue is economic growth. When it slows, competition for jobs and resources intensifies, the dwindling spoils are monopolised by the few, and those who lose out look for scapegoats. That turns politics into a zero-sum game where consensus becomes far more difficult to achieve.

Luce, a Washington-based columnist at the Financial Times, draws a line connecting the West’s economic travails, the end of western hegemony, and the rise of populist movements on both sides of the Atlantic. The “mortal threat” to the western idea of progress comes from within, Luce argues. He sees Donald Trump and his European counterparts not as the cause of the crisis in democratic liberalism but as a symptom. “Western liberal democracy is not yet dead, but it is far closer to collapse than we may wish to believe. It is facing its gravest challenge since the second World War. This time, however, we have conjured up the enemy from within.”

A theme of the book is the fragility of liberal democracy. “This is one of the reasons that I began the book with the Berlin Wall, because that was the high water mark of western democratic triumphalism,” Luce says in an interview on a visit to Dublin. “I think even sceptics were carried away by that moment. In a way it has been a long 25 years since then – a long quarter century of educating ourselves that nothing can be taken for granted.”

Systems and societies are not made by abstract constitutions and laws. They’re upheld by people. “If the people aren’t aware of what’s at stake, and how their behaviour affects those systems, then those systems are going to change and degrade.”

Luce doesn’t spare western elites, who he says have embraced a creed of personal enrichment that has created a new level of cynicism. “We’re abnormally cynical now, and I think there are good reasons for it. It’s not a deus ex machina phenomenon that we’re experiencing. It’s quite explainable.”

It’s a pessimistic assessment, but Luce is not without hope. “Retreat implies the possibility of regrouping,” he says, referring to the book’s title. “I very much do believe that western liberal democracy is salvageable and can continue to exist if not thrive if we play the politics right.” Western democracy can still produce positive moments; he mentions the Republic’s marriage equality referendum and the election of Emmanuel Macron as president of France.

But he warns against assuming that a victory such as Macron’s, or defeat for populists such as Geert Wilders in the Netherlands and Norbert Hofer in Austria, somehow prove that populism has peaked. The populist vote in all three of those countries has been rising steadily. Marine Le Pen of France’s Front National has played a “clever long game” and will know that failure for Macron – a technocratic ex-investment banker who embodies the French elite – would set her up nicely for the 2022 election. “This is a long trend we’re talking about. We shouldn’t celebrate pyrrhic victories. We should certainly celebrate Le Pen losing but we shouldn’t fool ourselves that the crisis is over, because it’s not.”