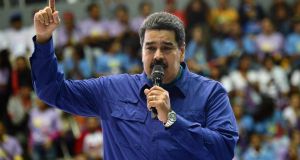 Venezuelan president Nicolas Maduro speaking during a rally in Caracas on Wednesday. “The people have decided already: Nicolas Maduro is president of the republic for the 2019-2025 period,” he said. Photograph: Federico Parra/AFP/Getty Images

Venezuela on Wednesday set a presidential election for April 22nd after mediation talks between the leftist government and an opposition coalition collapsed, setting the stage for the likely re-election of President Nicolas Maduro.

Venezuela’s ruling socialists had previously said a vote would be held before the end of April, with Mr Maduro running despite his widespread unpopularity and a crushing economic crisis in the oil-rich nation.

During talks in recent weeks in the Dominican Republic, the opposition lobbied for the vote to be held later this year to give it time to choose a candidate, as its top two leaders are barred from running.

But talks between the bitter foes crumbled on Wednesday, and the pro-government electoral board announced the April 22nd election date that night.

A raft of nations, including neighbouring Colombia, have already said they would not recognise the election, with criticism over unfair use of state resources and the sidelining of opposition politicians.

There are also fears of outright fraud.

The early election date will only fuel criticism that Mr Maduro has turned Venezuela into a dictatorship and could spur further sanctions from the United States.

Washington is closer to deciding whether to impose sanctions on Venezuelan oil, US secretary of state Rex Tillerson said earlier on Wednesday, in what would be a severe blow to the Opec member’s already ailing economy.

Mr Maduro’s government, however, has said it is prepared to withstand sanctions from the “imperialist” Trump administration.

Just minutes before the electoral board’s announcement, Mr Maduro was beaming at a campaign event at a Caracas park, during which he danced and embraced supporters.

“The people have decided already: Nicolas Maduro is president of the republic for the 2019-2025 period,” said the 55-year-old former bus driver and union leader.

Mr Maduro’s foes, who staged massive protests last year in an attempt to force early elections, say six more years of Mr Maduro at the helm would spark a full-fledged humanitarian crisis and the utter destruction of Venezuela’s economy.

They now face a quandary about how – and if – they should participate in the vote.

Some activists believe it is foolish to participate in what they consider a sham election, while others feel they have to keep up pressure by voting. For many increasingly impoverished and desperate Venezuelans, emigration has become the only escape valve. – Reuters