Polish PM falls foul of own draft Bill about Nazis 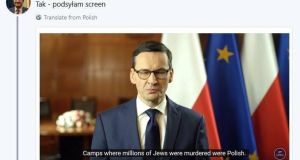 Screen grab of Polish prime minister Mateusz Morawiecki speaking on his YouTube channel. English subtitles show him saying camps where millions of Jews were murdered in the second World were Polish.

Polish prime minister Mateusz Morawiecki has become the first person to stumble over his own government’s draft law imposing fines or jail terms on anyone who blames Poland for Nazi atrocities.

The Bill is an attempt to crack down on a recurring problem of concentration and extermination camps, operated by occupying Nazis forces in Poland, being described as “Polish”.

On the prime minister’s YouTube channel, the English subtitles of his remarks about the law show him saying that the death camps “where millions of Jews were murdered were Polish”.

A spokesman for the prime minister’s chancellery blamed YouTube for the mistake in an automatic translation. The video was removed after it went viral online, but not before copies had been saved.

Mr Morawiecki appeared to make a second error in an English-language video about the 1940 Katyn massacre, when an estimated 22,000 Poles were murdered and buried in mass graves by Soviet forces.

In his video, removed by his office quickly but again saved by Facebook users, Mr Morawiecki refers to Katyn as a “site of German mass murder of Polish intellectuals”.

In 1943 Nazis discovered the mass graves in the forest of Katyn, now in Russia. Until 2010, Moscow denied Stalin and other Soviet officials carried any responsibility for the atrocity.

On Wednesday, Poland’s upper house of parliament passed an amended Bill making it illegal to accuse “the Polish nation or state” of complicity in the Holocaust.

The Bill foresees fines and a three-year jail term for “anyone who, against the facts, publicly states that the Polish nation or state was responsible or co-responsible for Third Reich crimes”.

The prime minister cannot be charged under his government’s law because, though it has cleared parliament, it has yet to be signed into law by the president.

According to reports, Israel has recalled its ambassador for consultations over the Bill it claims is an attempt to portray Poles exclusively as Holocaust victims.

The Polish people are among the greatest victims of Nazi violence. About three million of Poland’s 3.2 million Jewish population were murdered in German-built and operated death camps. The Nazis also murdered at least 1.9 million non-Jewish Poles.

But historians point out that anti-Semitism was widespread in wartime Poland and that an estimated 1,000 Jews in Poland were killed by other Poles during and immediately after the second World War.

As his videos went viral online, Mr Morawiecki was touring a museum dedicated to Józef and Wiktoria Ulma, a Polish couple who hid eight Jews in their attic. The couple and their six children were executed by the Nazis in March 1943 after the hideaways were discovered.

The museum’s website says the family were betrayed by a local police officer, believed to have been either Polish or Ukrainian.

The government’s amended Bill has caused uproar in Poland, and sparked a new wave of anti-Semitic jokes in sections of the media.

State television broadcast jokes about “Jewish death camps”. A right-wing tabloid journalist said on national radio that “if anyone speaks today for Israel, he should think twice if he should not give up Polish citizenship and exchange it for the Israeli one”.

His remark carries echoes of similar remarks by senior communist officials during an anti-Jewish government crackdown half a century ago in Poland. At least least 13,000 Polish Jews emigrated to Israel in this period, and were stripped of their Polish citizenship.

On Tuesday, the US state department said it would “encourage Poland to re-evaluate the legislation in light of its potential impact on the principle of free speech and on our ability to be effective partners”.

The Polish government insists the law will not harm freedom of speech because it has a caveat for “artistic or academic activity”.

“But what about journalists or tour guides?” asked Prof Jakub Urbanik, a law professor at the University of Warsaw. “It is very unclear language and you cannot draft a criminal law like this.”

Joining the criticism was Justice Elyakim Rubinstein, a former attorney-general and vice-president of the Supreme Court of Israel.

“It is very difficult to deal with history through a law . . . these are matters for history, not for legal proceedings,” he said at a public lecture at the University of Warsaw. “That there were Polish people involved in the persecution of Jews is a fact.”