‘Window is closing’ to halt virus in US, says health secretary 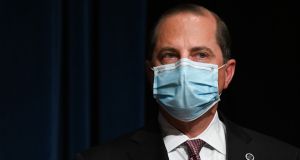 Alex Azar: “We have to act, and people as individuals have to act, responsibly. We need to keep social distance, we need to wear our face coverings.” Photograph: Erin Scott/Bloomberg

The US health secretary warned on Sunday that the window to halt the spread of coronavirus across America was closing after a clutch of southern states reported record increases in cases.

The US has now registered 2.5 million cases and more than 125,000 deaths from the disease – a quarter of global infections and fatalities despite the country comprising little more than 4 per cent of the world’s population.

While Los Angeles, Chicago and New York remain the hardest-hit cities, US health and human services secretary Alex Azar said cases were “surging” in southern parts of the country. Several of these states emerged early from lockdown against federal guidelines that recommend phased openings only once a state has recorded a fortnight-long reduction in cases.

“The window is closing,” Mr Azar told the NBC show Meet the Press on Sunday. He urged individual states to boost community-wide testing and collect blood plasma donated by patients who have recovered from the virus to bolster available treatments.

“We have to act, and people as individuals have to act, responsibly. We need to keep social distance, we need to wear our face coverings.”

Mr Azar said the surge in cases had nothing to do with states’ reopening but New York governor Andrew Cuomo blamed the increases on a failure to act earlier.

Asa Hutchinson, the Republican governor of Arkansas, said the US needed to double testing nationwide, telling ABC’s This Week on Sunday that he had “paused” further reopening in his state and that Covid-19 presented a “very, very serious challenge”.

Mr Azar made his remarks even as vice-president Mike Pence travelled to Texas to hold a campaign rally. President Donald Trump is attempting to reignite the economy and his re-election campaign after a severe drop in his poll ratings. Mr Trump spent the weekend playing golf.

Mr Pence, who on Friday described reopening efforts across the US as “encouraging news”, postponed visits to Arizona and Florida “out of an abundance of caution” over coronavirus. But he went ahead with his campaign rally in Dallas, where he arrived wearing a mask and was later due to meet the state’s Republican governor, Greg Abbott, who closed bars and limited restaurant occupancy following a steep rise in cases after initial reopenings.

The US recorded more than 42,000 new cases nationwide on Saturday and 500 deaths, according to Johns Hopkins University. This was a fall from the 45,000 new cases recorded on Friday, which was a new single-day high for the country.

On that day, 13 states set record highs for the seven-day average of new cases. Officials said a rise in asymptomatic cases among under-35s could ultimately endanger those more vulnerable to the disease.

Tom Frieden, former director of the Centers for Disease Control and Prevention, told Fox News Sunday that the virus had “the upper hand” and forecast that deaths would lag new cases by about a month.

“We’re moving too fast,” he said of states loosening restrictions. He added that numbers were set to get worse in coming weeks, citing a rapid upswing in Arizona, Texas, Florida and South Carolina. He estimated at least 15,000 more people would die in the US during the next month.

Florida’s rising cases of Covid-19 have businesses alarmed that they will be forced to close again. Restaurants have invested in sanitary measures to protect diners and those investments could be wasted if venues were forced to shut once more, said Carol Dover, head of the Florida Restaurant and Lodging Association.

“The bars are definitely going to take it on the chin right now” after they were closed on Friday, she said in an interview on Saturday. If restaurants are forced to close too, “that would be catastrophic. We cannot allow that to happen”. – Copyright The Financial Times Limited 2020

1 Coronavirus: Two more deaths confirmed amid concern over new clusters
2 Cluster of Covid-19 infections at Kerry ‘house party’ investigated
3 Subject of 'Lorenzo's Oil' film dies of pneumonia, aged 30
4 Reopening of pubs that do not serve food may be delayed beyond July 20th
5 Brightest comet of the century visible in Irish skies for the next week
Real news has value SUBSCRIBE