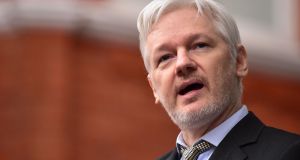 WikiLeaks founder Julian Assange has said his group will work with technology companies to help defend them against the Central Intelligence Agency’s reported hacking tools.

In an online press conference, Mr Assange acknowledged that companies had asked for more details about the CIA cyberespionage toolkit whose existence he purportedly revealed in a massive leak published on Tuesday.

Mr Assange said that: “We have decided to work with them, to give them some exclusive access to some of the technical details we have, so that fixes can be pushed out”.

Once tech firms have patched their products, Mr Assange said, he would release the full data of the hacking tools to the public.

The CIA has so far declined to comment directly on the authenticity of the leak, but in a statement issued on Wednesday it suggested that the release had been damaging by equipping adversaries “with tools and information to do us harm”.

Mr Assange began his online press conference with a dig at the agency for losing control of its cyberespionage arsenal, saying that all the data had been kept in one place.

“This is a historic act of devastating incompetence,” he said, adding that “WikiLeaks discovered the material as a result of it being passed around”.

“The technology is designed to be unaccountable, untraceable; it’s designed to remove traces of its activity.”