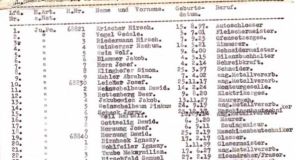 One of the original ‘Schindler’s lists’. The list has been put up for auction.

One of the original “Schindler’s lists”, the documents used by German industrialist Oskar Schindler to save more than 1,200 Jews during the Holocaust, has been put up for sale.

The document was among those drawn up to protect Jewish workers from deportation and death. It is expected to make more than $2.4 million (about €2.3 million).

It is one of only seven, and was compiled with help from Schindler’s accountant Itzhak Stern, who was portrayed by Ben Kingsley in the 1993 Steven Spielberg film of the story.

For sale through the Moments in Time auction house, which specialises in rare documents, the 14-page document is Schindler’s penultimate list and is dated April 18th, 1945.

It lists 801 male Jews at Schindler’s factory in occupied Czechoslovakia, who had been transported to work at the factory from the Nazi concentration camp at Plaszòw in German-occupied Poland.

The auction house’s website describes the document as an “exceedingly rare original” .

Three others are known to have survived, with two kept in Israel’s official Holocaust memorial Yad Vashem and another at the US Holocaust museum in Washington, DC.

“This is the opportunity of a lifetime to acquire an item of truly incredible magnitude.”

Gary Zimet, chief executive officer of the auction house, told Page Six: “It is a complete list of the Jewish workforce that Schindler saved from death.”

He added: “I got the list from the nephew of Schindler’s right-hand man, Itzhak Stern.”

Despite the document’s rarity and significance, the $2.4 million reserve is lower than its previous reserve price of $3 million in 2013, when it was last up for sale on eBay.

The original list of Schindler’s Jews was drawn up in the autumn of 1944 by Schindler, Stern and Mietek Pemper, an inmate of Plaszòw who was assigned as the personal secretary of Amon Göth, the concentration camp’s notorious commandant.