US rejects China’s offer to defuse tension on Korean Peninsula 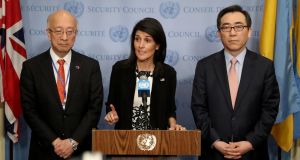 The US has rejected a Chinese proposal that it ease tensions on the Korean Peninsula by ending joint military drills with South Korea in return for China urging North Korea to halt nuclear and missile tests.

“We are not dealing with a rational person,” US ambassador to the United Nations Nikki Haley said of North Korean leader Kim Jong-un. She was speaking after a Security Council meeting to discuss North Korea’s launch of four ballistic missiles which came down the sea near Japan on Monday.

China’s foreign minister Wang Yi offered to try to broker a deal based on “joint suspension” but Ms Haley said it was impossible given the “ unbelievable, irresponsible arrogance that we are seeing coming out of Kim Jong-un at this time”.

In the past year, Pyongyang has fired dozens of missiles and conducted two of its five nuclear tests in defiance of UN resolutions. The Trump administration was evaluating how it would handle North Korea, Ms Haley said, and “all options” were on the table.

South Korean and US troops kicked off the two-month drill, code named Foal Eagle, on March 1st. The exercises, which involve ground, air and naval forces, are considered war preparations by North Korea.

Moon Sang-gyun, a spokesman for the South Korean defence ministry, said: “The joint exercises will continue without a halt. It is a purely defensive annual drill.”

Seoul sees the tests and missile launches as an escalation of the nuclear threat, and has begun deploying the US-built THAAD missile defence system. This move has angered China and Russia, who believe the system’s powerful radar could be used to track their missile launches.

North Korea’s foreign ministry sent a statement to UN secretary general António Guterres which warned that it would “reduce the bases of aggression and provocation to ashes with its invincible Hwasong rockets tipped with nuclear warheads and reliably defend the security of the country and its people’s happiness in case the US and the South Korean puppet forces fire even a single bullet at the territory of the DPRK”.

DPRK stands for Democratic Republic of Korea, the official name for North Korea.

The perceived threat from Pyongyang will be on the agenda when US secretary of state Rex Tillerson visits Asia next week. He will stay in South Korea for two days starting from March 17th and meet foreign minister Yun Byung-se and other senior government officials to discuss the North’s nuclear threat and co-operation in applying more pressure and sanctions on Pyongyang, ministry spokesman Cho June-hyuck told the Yonhap news agency.