Why New York police officers turned their backs on the mayor 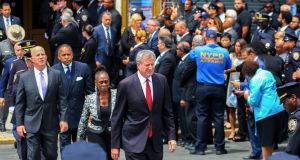 Donald Trump’s presence at the G20 summit and the leadership pretensions of his daughter Ivanka, who replaced him for a time at the top table, may have stolen the limelight at last week’s event in Hamburg, but the annual gathering stoked controversy elsewhere.

New York mayor Bill de Blasio also made the trip to Hamburg, much to the surprise of his constituents. The visit was announced just hours before he boarded a flight to Europe, and the response was less than rapturous.

As the heat cranks up on the east coast of America, New Yorkers are having a hot and sticky summer.

In particular, the aged and rickety subway system that pummels life into the city is beginning to show its age.

This week repairs began on Penn Station, heralding what may be a “summer of hell” for commuters, in the words of governor Andrew Cuomo. Two weeks ago a train derailed at the station, injuring 34 people. Delays on the line and overcrowding are common.

A report this week claimed that 74 per cent of subway riders were late for work in the past three months due to delays. “Our subway system is in crisis,” declared the city’s financial controller, Scott Stringer, at a press conference outside West 72nd Street subway station on Sunday.

De Blasio and Cuomo have been blaming each other about who has responsibility for the city’s ailing public transport.

“He’s in charge and he should just own up to it and take this responsibility seriously and put forward a plan,” de Blasio said in March. Technically he is correct – the state government, based in upstate New York, holds the purse-strings. Cuomo has given the Metropolitan Transportation Authority 60 days to come up with an assessment on track repairs and signal upgrades.

But the hostile reaction to de Blasio’s taxpayer-funded trip to Hamburg, where he spoke at a nonviolent demonstration against the G20 meeting, was not just down to the state’s transport and budgeting woes. De Blasio left for Hamburg a day after a 48-year-old police officer was killed in the city.

Miosotis Familia, a mother of three, was sitting in the front seat of a patrol truck doing paperwork shortly after beginning her night shift in the early hours of July 5th when a gunman opened fire and shot her in the head. She was rushed to hospital but did not survive. The gunman, who was shot by police, had earlier been the subject of several 911 calls by his girlfriend, who reported erratic and paranoid behaviour. He had also previously posted anti-police material on social media.

Familia grew up one of 10 children in the Bronx, where she still lived with her children and cared for her mother. She lived just miles from where she was shot.

Thousands of people lined the streets for her funeral, which took place in the heart of the area where she lived, worked and ultimately was killed.

The shooting has brought back into focus not just the reality of gun crime in the United States but the tensions between police and civilians that have surfaced in American society in recent years.

The shooting of Miosotis also recalled the shooting of two police officers, Wenjian Liu and Rafael Ramos, who were ambushed and shot in a patrol car in Brooklyn in December 2014. The perpetrator, 28-year-old Ismaaiyl Brinsley, who also shot himself, had earlier declared his intention on Instagram to kill police officers as a response to the police killings of two black men, Michael Brown and Eric Garner. The father of Wenjian Liu was among those who attended this week’s funeral.

De Blasio spoke at the funeral on Tuesday. He said Familia embodied the American dream – a first-generation immigrant, the first in her family to go to college. But for some police officers the words were not enough. There were reports that a small number of officers outside the church turned their backs as the mayor spoke, recalling the funeral of Liu in early 2015, when hundreds of police officers turned their back on the mayor.

De Blasio’s justification for travelling to Hamburg was that the world needed to know that not all Americans supported Trump’s policies. But for many Americans the reality of life, and the challenges it brings, continues despite who is in the White House. As the head of the Patrolmen’s Benevolent Association, Patrick Lynch, put it, “the mayor is the compass for the city of New York. He should have been here with the family. He should have been there with us.”