The US president’s unpredictable behaviour comes amid frayed political nerves 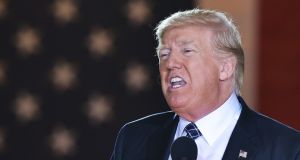 US president Donald Trump tweeted a video clip of him attacking an opponent in a wrestling match with a CNN logo imposed on the head of his opponent. Photograph: Mandel Ngan/AFP/Getty Images

In many ways Donald Trump’s departure from Washington this week for Europe was a relief for many in this increasingly polarised country.

Tired and divided over the extraordinary series of tweets that exploded from the White House in the preceding days, Americans grasped the July 4th annual holiday as an opportunity to relax and spend time with family and friends.

On Tuesday, the president, accompanied by a smiling Melania Trump, took to the Truman balcony at the White House to watch the fireworks.

Waving and relaxed, it was as if the staggering tirade of abusive tweets had never happened. Like a king and queen surveying all they rule, the Trumps looked out on to the capital, the couple appearing as symbols of an America many no longer recognise.

Donald Trump’s latest attacks on Twitter have led to a period of national introspection. On media outlets, references to the American civil war that pitted north against south a century and a half ago are being bandied about.

A particularly inflammatory video by the National Rifle Association (NRA), an institution of the political right in American politics that still commands unquestioned authority in Republican politics, also pushed the debate about violence into the mainstream.

The recruitment video is narrated by right-wing commentator and NRA spokeswoman Dana Loesch. In rhythmic, dystopian tones, she evokes a picture of a country under assault by an angry, liberal mob.

As pictures of iconic American buildings, protests and riots roll across the screen, the invective gathers pace.

“All to make them march, make them protest, make them scream racism and sexism and xenophobia and homophobia and smash windows, burn cars, shut down interstates and airports, bully and terrorise the law-abiding – until the only option left is for police to do their jobs and stop the madness.”

The tirade continues: “The only way we stop this, the only way we save our country and our freedom is to fight this violence of lies with the clenched fist of truth. I’m the National Rifle Association of America and I’m freedom’s safest place.”

In its positioning of “them” against “us”, its repetitive crescendo, its evocation of violence, the video has been perceived by many as a call-to-arms. The usual justification of gun ownership – the constitutional right to bear arms – is at no time mentioned in the video. Instead, the NRA appears to rationalise its argument by the need to defend itself against a new enemy – the enemy within.

The timing of the ad is significant. A recent spate of violence has imbued the video with added resonance.

Six weeks ago Greg Gianforte, the Republican candidate in a special election in Montana, assaulted a reporter from the Guardian, leaving him hospitalised. He won the seat in Congress after pleading guilty to misdemeanour assault.

Three weeks later a Democratic supporter launched a gun attack on Republican members of Congress at early-morning baseball practice just outside Washington. Congressman Steve Scalise, who was severely injured in the attack, was readmitted to hospital in intensive care this week. The presence of two armed police officers at the scene most likely prevented many deaths.

The debate about violence in political life also resurfaced this week following the US president’s tweet showing a video clip of him attacking an opponent in a wrestling match with a CNN logo imposed on the head of his opponent. The video was immediately condemned by journalist groups and CNN as inciting violence.

Asked about the Twitter post in Poland on Thursday, Mr Trump said CNN had taken it “too seriously”, repeating his claims that the network had “some pretty serious problems”.

Trump’s instinct to brush the incident off is not surprising. After all this is the man who said last year: “I could stand in the middle of Fifth Avenue and shoot somebody and I wouldn’t lose any voters.”

The president’s relationship with language and the truth is strained, but words can have consequences. Across the Mall from the White House the words of Martin Luther King are inscribed on a wall commemorating the civil rights leader. At the other end, the familiar phrases of Abraham Lincoln’s Gettysburg address are celebrated on the Lincoln Memorial.

Perhaps one day the Twitter musings of the 45th president will be commemorated in the nation’s capital. After all, as Trump said recently, his tweets are “modern day presidential”.