No watershed: A botched coup, and Turkey’s slide into authoritarian rule

World View: Now unassailable, President Erdogan has purged any and all ‘threats’ 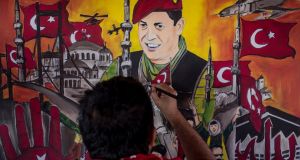 Successful coups alter the course of history, but even botched ones can profoundly change the direction of a country. So when, on this day last year, the first late-night reports emerged of tanks on the streets of Istanbul and men in uniform taking over the state broadcaster in Ankara, Turkey appeared to be at a fateful turning point. In the 12 months since, however, it has become clear that that abortive, short-lived putsch would serve not as a watershed but merely as an accelerant for a trend that was already in train: Turkey’s slide into authoritarian rule.

The coup, led by factions within the armed forces, was quickly suppressed in part thanks to ordinary people who took to the streets to face down the tanks. What followed, however, was a systematic series of purges, starting with anyone with any hint of allegiance to the exiled cleric Fethullah Gülen, whose followers the Turkish authorities say orchestrated the coup, but ultimately encompassing anyone deemed a threat by President Recep Tayyip Erdogan: judges, prosecutors, academics, pro-Kurdish politicians, journalists and civil servants. The numbers are staggering: more than 50,000 alleged Gülenists have been arrested, and the authorities have sacked more than 100,000 state employees and suspended a further 33,000.

More than 50,000 alleged Gülenists have been arrested, and the authorities have sacked more than 100,000 state employees and suspended a further 33,000

Over the past year 110 media outlets have been shut down for alleged links to Gülen’s network, and the press accreditation of 715 journalists has been revoked. A state of emergency declared in the aftermath of the failed coup remains in place 12 months later, giving the authorities sweeping powers to restrict individual rights.

Erdogan’s own position as president, which looked decidedly shaky as recently as June 2015, when his Islamist Justice and Development Party lost its parliamentary majority, is now unassailable. A referendum in April approved Erdogan’s long-held wish for an executive presidency, giving him immense new powers and curbing the parliament’s ability to constrain him.

The combination of unchecked power, high popularity ratings and acute paranoia has had sadly predictable results. In recent days Erdogan dismissed criticism of the detention of a group of human-rights activists, including the director of Amnesty International Turkey, who were arrested as they held a workshop near Istanbul.

The perilous state of Turkish democracy is all the more tragic given the speed with which the social climate has changed. Less than a decade ago Erdogan was seen by many as a pragmatic fixer. As mayor of Istanbul in the 1990s he won plaudits for tackling chronic infrastructural problems, and his 11 years as prime minister, from 2003 to 2014, was a period of rapid growth and rising living standards.

Barack Obama initially saw Erdogan as the sort of moderate Muslim leader who could bridge the divide between East and West. But by the end of his presidency, according to an April 2016 article in the Atlantic, based on lengthy interviews with Obama and his advisers, Obama considered Erdogan “a failure and an authoritarian”.

For many Turks the real turning point came in 2013, when millions protsted over economic precarity, inequality and the increasingly draconian rule of Erdogan’s party

For many Turks the real turning point, in hindsight, came in the summer of 2013. That was when youth-led resistance to a plan to raze Gezi Park, in central Istanbul, and to replace it with a shopping centre, morphed into a wider protest by millions over economic precarity, inequality and the increasingly draconian rule of Erdogan’s party. The crowds were a mix of liberals, environmentalists, football fans, LGBT activists, Kurds and even some leftist Islamists.

The authorities appeared rattled by the movement and were unsure how to deal with it, at times standing back and at other times sending in riot police with tear gas to disperse the crowds. “I think the Gezi protests happened because of the space he” – Erdogan – “allowed,” Prof Umut Özkirimli, a specialist in Turkish politics now based at the centre for Middle Eastern studies at Lund University, in Sweden, told me last year. “But then he realised that he couldn’t control the monster, and he started to brutally suppress everything.”

One of Erdogan’s greatest strengths is his country’s strategic importance. It’s not only that Turkey is big; it’s also a vital frontier state, a Nato member, a bridge between East and West, and a laboratory that tests how democracy can be reconciled with political Islam. Erdogan and the European Union are locked in a symbiotic, if increasingly awkward, embrace. Ankara cannot afford to alienate the EU, which is by far its largest trading partner, while the EU needs Erdogan to keep his side of the deal on Syrian refugees, under which Turkey stops refugees crossing from its side of the Aegean in return for European cash.

Western leaders haven’t always played their cards well. They left many Turks justifiably furious by failing to show public solidarity with Ankara after last year’s coup attempt. Instead of using the prospect of EU membership as a carrot for Turkish moderates and progressives, the EU has too often, driven by those states that oppose Turkish membership at all costs, used it as a stick with which to beat a vital neighbour. Instead it should be offering encouragement to the great many Turks who hold on to the hope that it’s not too late to change their country’s course.