America’s young have little interest in the world

US Politics: It is not the pacifism or realpolitik that is striking, but the indifference 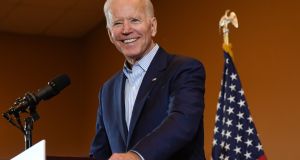 Towards the end of an almost-great career, which did not include his dream assignment as secretary of state, the US diplomat Richard Holbrooke confided in his diary. “The question constantly arises,” he wrote, after failing to win the ear of president Barack Obama, “how long do you want to do this?”

The biography in which the quote appears, Our Man by George Packer, published this week, is meant as an elegy for the “American century”. It is too early for that. Relative decline is real but it is slow. Britain lost its economic primacy in the later 19th century but did not fall out of the first rank of powers until the middle of the 20th. The US should remain the most influential nation for a while yet.

Instead, the book works better as an elegy for a certain type of Democrat. Holbrooke was outward-looking, diplomatic but open to the use of force, and restless to fix even the bits of the world that did not touch on American interests. The type has been familiar from Harry Truman’s time to Hillary Clinton’s. Much of the world is counting on its return if President Donald Trump loses the 2020 election. In place of narrowness and paranoia: global leadership. To judge by the contest for the Democratic presidential nomination, those expectations should be tempered.

Several months into the race, almost none of the 20-plus hopefuls has said anything of note about foreign policy. The one candidate to define himself by the subject, congressman Seth Moulton, is trailing badly. The one most steeped in it, former vice-president Joe Biden, hardly brings it up. The party is as rich with ideas as it has been for a generation – universal healthcare, plans for climate change abatement – but they are either domestic or only tangentially international. There is plenty of diplo-waffle about respecting allies and recovering lost honour, but it all feels pro forma. It is not the pacifism or the isolationism or the realpolitik that is striking here. Those, at least, would count as policies, or at any rate impulses. What stands out is the indifference.

US allies will find comfort in precedent. It is not as if the Democratic primaries of 1976 or 1992 were international relations symposia. Yet the first threw up Jimmy Carter, who struck the Egypt-Israel peace treaty, and the second produced Bill Clinton, who negotiated, via Holbrooke, the Dayton peace accord for the Balkans.

Still, something deeper, more generational, seems to be at work this time. A new survey of public attitudes by the Center for American Progress, a think tank, finds that 59 per cent of baby-boomers – those born between 1946 and 1964 – and their elders believe the US should take a “leading role in the world”. Just 45 per cent of millennials and their juniors do. That will change as they age, you might think, but the number for the middle group of Generation X is just 46. In fact, lots of millennials and people born after them “hold no strong views whatsoever about any foreign policy or national security issue”.

In other words, the Americans who are most keen on global burden-bearing will, to put it tactfully, stop voting over the coming decades. Governments must increasingly answer to an electorate that prioritises the domestic. Foreign policymakers might rather their craft take place in a Kissingerian bubble, sealed off from the mob, but such nuisances as the universal franchise will tend to get in the way. It matters, then, that millennial views of US leadership are so jaundiced by the triple fiasco of Iraq, Afghanistan and Libya. This generation will soon be the largest segment of the US electorate. It is already setting the tone in the Democratic Party.

The “liberal international order” (a phrase lost on voters, says the Center for American Progress research body) is not, despite the way it is sometimes discussed, a product of nature. It is the product of circumstances that have obtained for not all that long. One of these was a generation of willing Americans. That will has been slipping for a while. Now romanticised as a global citizen, Obama was at the time thought tentative and parochial, as was Clinton and, before the attacks of 9/11, George W Bush, too.

At some point, it will register on the critics that individual politicians matter less than the popular constraints on them. By skirting foreign policy, the Democratic candidates are being, well, democratic. If Trump loses to one of them, US allies can certainly count on a more gracious and predictable successor. But on not much more than that. In the end, the question Holbrooke asked himself is for voters at large, the ultimate underwriters of Pax Americana. “How long do you want to do this?” – Copyright The Financial Times Limited 2019

1 ‘It was pitch black’ - Rescued teenager describes night afloat with her cousin in Galway Bay
2 Aaron Brady, the man who said with pride he was a cop killer
3 Garda killer Aaron Brady will be almost 60 by time he leaves prison
4 Death of terminally ill prisoner ‘inhuman and degrading’, says charity
5 Coronavirus: 67 additional cases but no new deaths reported in the State
Real news has value SUBSCRIBE