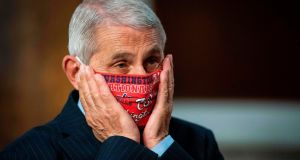 Dr Anthony Fauci, director of the US National Institute for Allergy and Infectious Diseases. Photograph: Al Drago/AFP via Getty Images

Trump administration officials turned their fire over the weekend on Anthony Fauci, a member of the White House’s own coronavirus task force who has been critical of the US handling of the pandemic.

Several administration officials publicly challenged Dr Fauci’s assessment that the US was not “doing great” when compared to other countries’ handling of the virus.

On Sunday, Brett Giroir, a health and human services official and member of the same task force, rejected Dr Fauci’s assessment, along with his recommendation that states experiencing a new spike in cases should shut down their economies.

“I respect Dr Fauci a lot, but Dr Fauci is not 100 per cent right and he also doesn’t necessarily, and he admits that, have the whole national interest in mind,” Mr Giroir told the NBC programme Meet The Press on Sunday.

“He looks at it from a very narrow public health point of view.”

In two separate television interviews during the week, President Donald Trump also took aim at Dr Fauci, telling the Fox News host Sean Hannity that he was “a nice man, but he’s made a lot of mistakes” and Gray TV’s Greta Van Susteren that he disagreed with Dr Fauci’s assessments.

Dr Fauci is both the director of the US National Institute of Allergy and Infectious Diseases and, until recently, the public face of the administration’s coronavirus response. In a podcast interview with the FiveThirtyEight website on Thursday, he said some cities had done well in controlling the outbreak: “But as a country, when you compare us to other countries, I don’t think you can say we’re doing great. I mean, we’re just not.”

The US has a quarter of the almost 13 million coronavirus cases around the world, and is experiencing a surge of infections in many states.

On Sunday, White House officials provided US news outlets with a list of past comments Dr Fauci had made about the virus and its spread that they said had proven to be wrong.

These included remarks he made in January in which he declared that coronavirus was “not a major threat for people in the US” and that asymptomatic carriers of the virus were unlikely to be spreaders of the disease.

The White House also seized on a remark by Dr Fauci in March when the doctor played down the benefits of wearing face coverings.

Dr Fauci seemed to acknowledge tensions with the White House in an interview with the Financial Times published over the weekend, in which he revealed that he had not met the president in person since June 2nd and had not briefed him in more than two months.

The health official told the FT that a March interview with Science magazine – in which he declared: “I can’t jump in front of the microphone and push [Mr Trump] down” – had caused “a tussle”.

However, the doctor said he was “sure” his messages to the president were being passed on.

“I have a reputation, as you probably have figured out, of speaking the truth at all times and not sugar-coating things,” he said. “And that may be one of the reasons why I haven’t been on television very much lately.” – Copyright The Financial Times Limited 2020