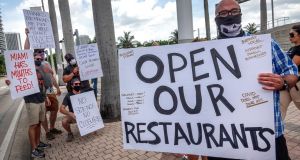 South Africa will reimpose a ban on the sale of alcohol and a nighttime curfew to reduce pressure on its hospitals as coronavirus infections rise rapidly, president Cyril Ramaphosa said on Sunday.

Mr Ramaphosa’s government imposed one of the strictest lockdowns in the world in late March and delayed a surge in infections, but it has since eased many restrictions over fears for its struggling economy.

More than 12.94 million people have been reported to be infected by the novel

coronavirus globally and 567,357 have died, according to a Reuters tally

South Africa has the highest number of confirmed coronavirus cases in Africa and is now recording the fourth-largest daily increase in new cases worldwide.

Mr Ramaphosa said in a televised address that the country could not afford for its hospitals and clinics to be burdened with avoidable alcohol-related injuries.

“This is a fight to save every life, and we need to save every bed,” he said. “The coronavirus storm is far fiercer and more destructive than any we have known.”

The nighttime curfew will last from 9pm to 4am and take effect from Monday, apart from for those travelling to or from work or seeking medical help.

Regulations on the wearing of masks will be strengthened, but the country will remain on the third level of its five-level coronavirus alert system.

Ramaphosa said current projections showed different provinces would reach the peak of infections between the end of July and late September.

He said scientists had presented models that forecast between 40,000 and 50,000 coronavirus deaths before the end of the year, adding: “We must make it our single most important task to prove these projections wrong.”

Florida reported a record increase of more than 15,000 new cases of Covid-19 in 24 hours on Sunday, as the Trump administration renewed its push for schools to reopen and anti-mask protests were planned in Michigan and Missouri.

If Florida were a country, it would rank fourth in the world for the most new cases in a day behind the United States, Brazil and India, according to a Reuters analysis.

Florida’s daily increases in cases have already surpassed the highest daily tally reported by any European country during the height of the pandemic there. It has also broken New York state’s record of 12,847 new cases on April 10th when it was the epicentre of the US outbreak.

The latest rise was reported a day after Walt Disney World in Orlando reopened with a limited number of guests who were welcomed with a host of safety measures, including masks and temperature checks.

Anti-mask activists in several states, including Florida and Michigan, have organised protests against local mandates, arguing that the measures infringe upon individual freedom.

Coronavirus infections are rising in about 40 states, according to a Reuters analysis of cases for the past two weeks compared with the prior two weeks. Nationally, the United States has broken global records by registering about 60,000 new cases a day for the last four days in a row, according to a Reuters tally. Hospitalisations and positive test rates are also rising in Arizona, California, Florida and Texas.

Florida reported a record amount of testing, with nearly 143,000 results announced on Sunday compared with an average of 68,000 for the prior seven days.

Facing a battered economy as he seeks re-election in November, president Donald Trump has pressured states to reopen shuttered businesses and schools.

Education Secretary Betsy DeVos said on Sunday that her department did not have its own safe reopening plans to promote, and each school district and state must devise their own plans based on their local coronavirus infection rates.

Health officials have pleaded with the public to wear masks to limit the spread of the virus, but the issue has become politically divisive in the United States unlike many other countries that have seen far lower rates of infection and death.

Mr Trump wore a mask for the first time in public when he visited a Washington DC-area military medical centre on Saturday. He had previously refused to wear a mask in public or ask Americans to wear face coverings, saying it was a personal choice.

Many Americans still refuse to wear a mask, which health experts say help stop transmission of the virus that has killed more than 134,000 Americans.

Deaths in Mexico from the coronavirus pandemic rose above 35,000 on Sunday, with the country overtaking Italy for the world’s fourth-highest death total, according to Reuters data.

But leftist president Andres Manuel Lopez Obrador said on Sunday that the pandemic was “losing intensity” in Mexico, and blamed what he called “conservative media” for causing alarm.

Mexico on Sunday recorded 276 additional fatalities and 4,482 new infections to bring its coronavirus death toll to 35,006, with 299,750 confirmed cases. Italy has recorded 34,954 deaths and 243,061 cases. Mexico trails the United States, Brazil and the UK in total deaths.

While Italy appears to have tamed the virus, the pandemic is showing few signs of easing in Mexico, where the government has faced criticism for reopening its economy too soon.

Mr Lopez Obrador said he was briefed on the pandemic this past week and was optimistic.

“The report is positive, good. The conclusion is that the pandemic is going down, that it is losing intensity,” he said in a video message.

Mr Lopez-Gatell has kept revising his projections for total fatalities and as recently as June forecast up to 35,000 deaths through October. In early May, the estimate was 6,000.

The coronavirus death toll per million residents in Mexico, whose population numbers about 120 million, is the 16th highest in the world, according to data by research firm Statista.

But Mexican officials say the true toll is likely much higher due to limited testing. A Reuters analysis of funeral-home data in May indicated a toll more than double the reported figures.

Several former officials have criticised Mr Lopez Obrador’s administration for its management of the epidemic.

Former health minister Salomon Chertorivski, who held the post from 2011 to 2012, said on Thursday the government had reopened the economy before meeting globally established criteria for doing so. He added that Mexico might need to impose a new lockdown.

The Philippines reported on Monday its biggest daily jump in coronavirus deaths and warned of a risk of further fatalities and infections after the easing of lockdown restrictions and as authorities scramble to verify thousands of suspected cases.

A health ministry official reported 162 new deaths, which is also the biggest single-day jump recorded in Southeast Asia to date, while 2,124 new infections were announced.

The number of Covid-19 infections has more than tripled to 56,259 since June 1st when the government started easing tight restrictions, including allowing public transport, restaurants and malls to open at limited capacities to restart the economy.

The health ministry said it expected the number of fatalities to rise beyond the total 1,534, with nearly 12,000 suspected positive cases yet to be verified.

President Rodrigo Duterte eased one of the toughest and longest lockdowns in the world in the capital Manila in June to breathe some life back into the economy, but partial curbs remain.

He also reinstated strict lockdown measures in Cebu City from June 16th, which is emerging as a new hot spot with a 10th of the country’s total infections.

Russia on Monday reported 6,537 new cases of the novel coronavirus, pushing its overall tally to 733,699, the fourth largest reported in the world.

Authorities said 104 people had died in the last 24 hours, bringing the official death toll to 11,439.-Reuters