US Wrap: Trump claims ‘big progress’ in fight against coronavirus 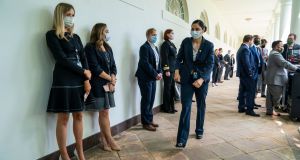 Staff at the White House have been ordered to wear face masks after at least two aides tested positive for coronavirus last week.

The rule does not apply to US president Donald Trump, however.

The move came after he asserted that coronavirus rates were going down “almost everywhere” and claimed “big progress” was being made in the fight against Covid-19, despite members of the White House coronavirus task force having to self-isolate.

It came as the US death toll from coronavirus was confirmed at 80,297, as compiled by Johns Hopkins University.

In a series of tweets on Monday, Mr Trump claimed some media outlets were not giving his administration credit for its handling of the crisis.

“Great credit being given for our Coronavirus response, except in the Fake News. They are a disgrace to America!” he tweeted.

“Coronavirus numbers are looking MUCH better, going down almost everywhere. Big progress being made!”

Senior members of the task force are self-isolating following the confirmed cases, though vice-president Mike Pence was back at work in the White House on Monday, despite his press secretary testing positive.

Coronavirus task force immunologist Anthony Fauci and the directors of the Food and Drug Administration (FDA) and the Centers for Disease Control and Prevention (CDC) will testify before a Senate committee by videoconference on Tuesday. The committee chair Lamar Alexander will chair the session remotely, after one of his staff members contracted the virus.

“The great people of Pennsylvania want their freedom now, and they are fully aware of what that entails. The Democrats are moving slowly, all over the USA, for political purposes. They would wait until November 3rd if it were up to them,” he tweeted, referring to the election date. “Don’t play politics. Be safe, move quickly.”

Mr Trump was expected later on Monday to announce new measures and funding to ramp up testing in states this month, focusing particularly on nursing homes and areas of high-density population.

More than nine million tests have now been performed in the US, which has the highest number of confirmed coronavirus infections in the world.

While there has been an uneven pattern of states reopening across the country – with some maintaining strict lockdowns – Mr Trump has actively encouraged states to reopen, as the toll from the virus continues to impact on the US economy.

In New York, governor Andrew Cuomo said some parts of upstate New York could begin to reopen. Limited construction, manufacturing and on-street retailing may be permitted in three regions from next weekend, Mr Cuomo said.

However, New York City is likely to continue to mandate the closure of non-essential businesses and a ban on large gatherings until the end of June, the city’s mayor Bill de Blasio said.

Another 161 deaths were reported in New York on Monday, the lowest number since March 27th, suggesting a slowing of the fatality rate in the US’s worst-hit state.

More than 26,000 people have died in New York state since it reported its first death from coronavirus in mid-March.

Other states across the country saw more businesses reopening, though some were in breach of local rules. Social media posts showed a packed restaurant in Colorado on Sunday for Mother’s Day, despite a ban on in-dining in restaurants in the state.

Virginia will begin easing restrictions later this week, governor Ralph Northam confirmed on Monday, though officials in the northern part of the state have requested a delay in easing the restrictions.

From Friday, churches and stores will be permitted to open with 50 per cent capacity, while hairdressers and barbershops will open with appointments only.