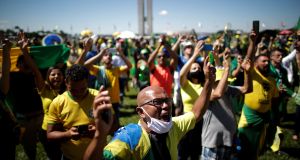 Supporters of far-right Brazilian president Jair Bolsonaro taking part in a protest in Brasilia on May 3rd. Photograph: Ueslei Marcelino/Reuters

For thousands of Venezuelans who sought refuge in the northern Brazilian city of Boa Vista, life was already tough. Fleeing economic collapse at home, they were living in shelters erected by the military or informal settlements dotted around the capital of Brazil’s northernmost state. With limited work opportunities available many relied on field kitchens for food.

And then the new coronavirus arrived.

“It was a difficult situation already and now Covid is making it worse,” says Michael Parker, who co-ordinates the relief effort of Médecins Sans Frontières in Boa Vista. Facing this new threat, among its tasks the medical aid organisation is now trying to improve sanitary conditions and ensure social distancing at sites which host refugees.

But the challenge is enormous. “With people crammed into the camps it is difficult for washing, cleaning clothes or even just going to the toilet,” says Parker. “So right now we are focused on ensuring enough water gets in there and that people have access to soap so they can wash their hands.”

The situation of Venezuelans in Boa Vista is a reminder that although coronavirus arrived in Latin America later than other places, it is now penetrating into a region that spent 2019 racked by political crises and social unrest.

Even before the economic shock caused by the impact of the pandemic, Latin America was the world’s slowest growing region and seething with discontent as a result.

Some Latin countries have responded well to the challenge. In Central America, Costa Rica’s long-term investment in its public health system means it has managed to keep infections below 1,000 and deaths to just six, the lowest in the region. But elsewhere there has been calamity.

In the Ecuadoran city of Guayaquil bodies piled up in the street after the health system collapsed. Across the region infections have now surged past 300,000 and the official death toll is closing in on 20,000.

Of the 11 states where analysts at London’s Imperial College say the virus is likely growing, six are in Latin America, including Peru, Colombia and, most worryingly because of their huge populations, Mexico and Brazil.

In Venezuela itself the pandemic has accelerated the country’s slow-motion implosion that has already forced more than four million people to flee the country. The collapse in demand for oil has denied the dictatorship of President Nicolás Maduro its last meaningful source for foreign earnings.

Without funds to tackle the health emergency, Caracas has asked the Bank of England to sell some of its gold reserves held in London and give the profits to the United Nations to administer in Venezuela. Meanwhile the country’s opposition has been implicated in a farcical invasion attempt by US military contractors earlier this month.

But some Latin countries that last year were navigating severe turbulence of their own have responded well to the pandemic. In 2019 Argentina was roiled by interlocking political and financial crises.

Despite this inheritance the new government of President Alberto Fernández has slowed the spread of the virus by winning widespread backing for an early and strict lockdown, meaning fewer infections than neighbouring Chile despite having 2½ times the population.

Little attempt has been made to co-ordinate among states, pooling equipment purchases and sharing best practices.

In sharp contrast to Fernández’s response have been those of two of the world’s leading coronavirus deniers, Andrés Manuel López Obrador and Jair Bolsonaro, the presidents of Mexico and Brazil respectively. The two populists have sought to shrug off the threat posed by the virus, peddling quack cures and theories instead of leading national efforts to contain its spread and remaining unfazed even as the number of infections and deaths in both countries rise.

In Mexico more than 3,500 people have died of Covid-19 while in Brazil the official death toll has now passed 11,000 as the country risks becoming the new global epicentre of the pandemic.

The highly erratic behaviour of the two men in the middle of the pandemic has caused anxiety among neighbours. The presidents of Argentina, Chile and Uruguay have already spoken by phone about what Argentina’s president characterises as the “risk” represented by Brazil.

“The fear is that Brazil and Mexico, the two most populous nations in the region and the worst at tackling this, could become sources of infection for neighbouring states in Central and South America,” says Maurício Santoro, professor of international relations at Rio de Janeiro State University.

The uneven nature of the pandemic response across Latin America also highlights just how far regional efforts at integration have gone into reverse in recent years. Little attempt has been made to co-ordinate among states, pooling equipment purchases and sharing best practices.

“This should be the golden moment of regional co-operation and nothing is happening at all. Instead there is a massive leadership vacuum,” says Oliver Stuenkel, professor of international relations at São Paulo’s Getúlio Vargas Foundation.

That means it will be an even more fragmented Latin America that emerges from the crisis, with many of the economic causes of last year’s unrest exacerbated by the pandemic’s impact. “Governments are going to have even fewer resources to tackle these problems,” notes Santoro.

This week sees Argentina already on the verge of declaring a ninth sovereign debt default and the International Monetary Fund forecasts Latin America’s economy will suffer its worst ever contraction this year. Economists are warning about a lost decade of growth.

“It is hard to think right now of a scenario in which the region is getting through this without major upheaval at least on the scale of 2019 or worse and I expect it to be worse,” warns Stuenkel.