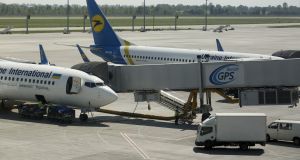 At this torrid time for Ryanair, it may surprise hundreds of thousands of inconvenienced ticket holders to know that one of Europe’s biggest countries is still craving its presence.

Ukraine hoped to announce an agreement with Ryanair this summer, when the European Union granted visa-free travel to its 46 million citizens in one of the most tangible results of the nation’s pivot to the West following a 2014 revolution.

The deal collapsed when Kiev’s Boryspil airport rejected it as economically unviable. But many Ukrainians blamed a familiar bugbear for depriving them of cheaper flights throughout a newly open Europe – a tycoon determined to protect his interests from competition, regardless of the cost to the general public.

It was a very public setback to Ukraine’s efforts to attract big foreign firms to a country that has spent more than three years fending off Russian aggression and the threat of economic collapse. But the government insists that Ryanair’s arrival has only been postponed, not cancelled.

The dominant carrier at Boryspil is Ukraine International Airlines (UIA), which is partly owned by Ihor Kolomoisky, a billionaire oligarch who wields major political as well as financial clout.

When Ryanair announced in July that it would not launch flights to Ukraine because “Kiev airport has instead chosen to protect high fare airlines [including Ukraine International Airlines]”, suspicion fell on Kolomoisky.

“The airline’s official announcement is a diagnosis for the state,” reformist deputy Mustafa Nayem wrote at the time.

“Basically...it says: ‘Dear Ukrainians, because, in your madhouse, you are used to protecting the interests of and paying tribute to a certain oligarch, perhaps we will invest our resources in some other, more civilised, state’.”

Ukrainian infrastructure minister Volodymyr Omelyan told The Irish Times that the deal failed “only because of an artificial blockade from the monopoly of Ukraine International Airlines owned by Kolomoisky”.

He describes the prospect of Ryanair services as “a completely great picture for the whole of Ukraine, except maybe for one or two guys”.

“In my opinion, Ryanair should and will be an icebreaker for Ukraine. It’s not only about aviation but about breaking through the monopoly that we have in all spheres of the economy.”

UIA is suing Mr Omelyan over the affair, while denying that anyone associated with it interfered in talks between Ryanair and Boryspil – a position shared by the airport’s general director, Pavlo Riabikin.

“The co-owner of UIA, Ihor Kolomoisky, the other owners and beneficiaries played no role in the negotiation process between Boryspil and Ryanair, made no pressure on the airport management,” he told The Irish Times.

Boryspil blames Mr Omelyan for agreeing a memorandum of understanding with Ryanair without its approval, and accuses the airline of demanding unreasonable discounts to airport fees.

Mr Omelyan portrays the managers of Boryspil as Mr Kolomoisky’s puppets, but they are not alone in suggesting that some responsibility for this fiasco may lie with another ruthless dealmaker – Ryanair chief executive Michael O’Leary.

“Ryanair painted that picture beautifully. It was brilliant negotiating on their part but it’s not an accurate picture,” said Daniel Bilak, the Canadian-born director of UkraineInvest, the country’s investment promotion agency.

The deal that Ryanair wanted “would have killed the entire business model of Boryspil airport”, he explained.

“There’s no question that we have competition issues with UIA. On the other hand, they don’t control [Boryspil] airport totally. We have lots of airlines flying in and out and competing with them.”

Such messy struggles are likely to play out across Ukraine’s economy as international firms challenge domestic tycoons who are accustomed to using their opaque political networks to maintain a stranglehold on business.

“We’re not just reforming the system but changing it completely. Of course there is pushback. This is the last emerging or frontier market of size and scale in Europe,” Mr Bilak said at government headquarters in Kiev.

What is opening up for investors is a country that borders four EU states, has high levels of education yet low wages, some of the best farmland in the world, a dynamic IT sector, large but ageing road and rail networks, navigable rivers and a Black Sea coastline with several major ports.

Russian-occupied Crimea and areas held by Moscow-controlled separatists account for only a 7 per cent fringe of Ukraine’s territory, and the rest of the country is now integrating with western markets through a historic trade and political pact with the EU that came into force fully last month.

Ryanair will surely have noted that about six million Ukrainians visited EU states since June, including more than 235,000 whose biometric passports allowed them to travel without a visa.

“The aim is to get Ryanair and other low costs airlines into Ukraine to change Ukraine by having world-class companies working here, and to help Ukrainians change by travelling all over Europe to see that Europe is different,” said Mr Omelyan.

According to Mr Bilak: “As the world’s largest low-cost carrier, we would love to have them here and we will have them here. They can’t ignore this market of 46 million people.”