Weinstein accusers tell him his legal woes are not over 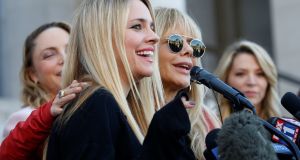 A group of Harvey Weinstein’s accusers have warned the disgraced former film producer that his legal woes are not over and they intend to pursue him to court in Los Angeles.

Weinstein’s spectacular downfall was completed on Monday when a New York City jury found him guilty of rape and sexual assault, leaving him facing the prospect of decades behind bars.

And the once all-powerful Hollywood mogul may soon be back in a courtroom as prosecutors in Los Angeles have already filed fresh charges against him.

During an emotional press conference on the steps of LA City Hall, 11 of the scores of women who allege they were assaulted by 67-year-old Weinstein insisted the case was not yet finished.

Louisette Geiss, an actor and producer, said: “Harvey, you messed with the wrong women. We will see you here in Los Angeles where hopefully your conviction will leave you in jail for life.”

Canadian actor Larissa Gomes alleges she was sexually harassed by Weinstein. She said the New York trial had brought her “a sense of peace”, adding: “Now we can turn our attention to the upcoming trial here in LA. We have an opportunity to build on this momentum. This verdict is not everything, but it’s significant in so many ways.”

Caitlin Dulany, an actor and activist, thanked jurors and prosecutors for the Weinstein verdict, and said the “world will never be the same for survivors everywhere”.

Turning her attention to the Los Angeles case, she said California law may allow more witnesses at a potential trial, adding: “I certainly hope you hear from all of us in that trial.”

The Los Angeles District Attorney has so far refused to comment on the New York verdict.

They stood side-by-side in Los Angeles, a day after Weinstein was found guilty of raping an aspiring actress in a New York City hotel room in 2013 and sexually assaulting a production assistant at his apartment in 2006 by forcibly performing oral sex on her.

He was acquitted on the most serious charges, two counts of predatory sexual assault, each carrying a sentence of up to life in prison.

Arquette hailed his conviction as a “landmark moment” in how the public views sexual assault. : “The public is seeing that men, even a man as powerful and famous as Weinstein, will be held accountable for their abuse of women,” she said.

The actor, who was heckled by a passer-by, fought back tears as she heralded a “historic shift”.

Weinstein’s conviction was the first of the #MeToo era, which was sparked by October 2017 reports of his alleged mass sexual assaults. His lawyers have already said they are planning to appeal. Weinstein, who throughout his trial relied on a walking frame, was led from court in handcuffs after the guilty verdict.

He was later taken to a hospital by ambulance after reportedly complaining of chest pains.

Geiss cast doubt over the legitimacy of Weinstein’s illness. “I personally felt like he’s a very good actor,” she said during a press conference.

“This is a man who knows how to manipulate the press and clearly he’s done so with his iconic walker; let’s just say I know women who are literally dying who are also victims and I say let’s give them the help.

“If he’s got to to go the hospital it should be in jail, that kind of hospital, not one where he has his own suite.” – AP