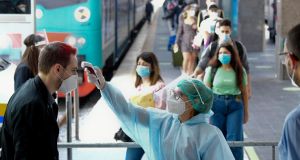 A passenger’s body temperature is checked at the Naples Central Station, after the reopening of regional borders amid an easing of restrictions during Phase 2 of the coronavirus emergency, in Italy on Wednesday. Photograph: Ciro Fusco/EPA

More than 6.38 million people have been reported infected with the coronavirus globally and 380,331 have died, according to a tally kept by Johns Hopkins University. Infections have been reported in more than 210 countries and territories since the first cases were identified in China last December.

The United Kingdom’s Covid-19 death toll surpassed 50,000 on Wednesday, according to a Reuters tally of official data sources that highlighted the country’s place as one of the worst hit in the world. New data from Scotland brought the toll to 50,059, a dire milestone for prime minister Boris Johnson as he tries to ease the stringent coronavirus lockdown. The figure is the highest in Europe and puts the UK behind only the much larger United States in a pandemic that has killed more than 379,000 people around the world. Such a large death toll has prompted criticism of Mr Johnson, who opposition parties say was too slow to impose a lockdown or protect the elderly in nursing homes or to build a test and trace system.

Sweden should have done more to combat the coronavirus, the epidemiologist behind a national strategy that avoided the strict lockdowns seen in many other countries said on Wednesday. Anders Tegnell’s comments followed mounting criticism of the government’s handling of the crisis and a policy that has relied largely on voluntary action, social distancing and common-sense hygiene advice but has failed to prevent the virus spreading. Sweden has a lower Covid-19 mortality rate than European countries such as Britain, Spain and Italy which enforced stringent lockdowns. But, with 443 deaths per million people, it has the eighth highest number of coronavirus-related deaths per capita in the world, and had the highest Covid-19 mortality rate in Europe for parts of May, according to research group Ourworldindata.org. “Yes, I think we could have done better in what we did in Sweden, clearly,” Mr Tegnell, the chief epidemiologist at the Public Health Agency, told Swedish radio. “If we were to run into the same disease, knowing exactly what we know about it today, I think we would end up doing something in between what Sweden did and what the rest of the world has done,” he said.

India’s coronavirus infections crossed 200,000, official figures showed on Wednesday, and a peak could still be weeks away in the world’s second-most populous country, where the economy has begun re-opening after a lockdown imposed in March. Cases jumped by 8,909 over the previous day in one of the highest single-day spikes, taking the tally to 207,615, the health ministry said. “We are very far away for the peak,” said Dr Nivedita Gupta, of the government-run Indian Council of Medical Research. Government officials have previously said it could be later this month, or even July, before cases start to fall off. The death toll from the disease stood at 5,815. Six other nations, including the United States, Britain and Brazil, have higher caseloads, and in India’s favour, at least its mortality rate has been comparably low. But, India’s infections are rising as it ends a severe lockdown of its 1.3 billion people imposed in March.

Brazil registered another record number of novel coronavirus deaths over the last 24 hours, the health ministry said on Tuesday evening, as the pandemic in Latin America’s largest country shows no signs of slowing down. The nation registered 28,936 additional cases of the novel coronavirus, the ministry said, and 1,262 deaths. There are now 555,383 total confirmed coronavirus cases in Brazil and 31,199 coronavirus deaths. The fresh record comes as some Brazilian leaders, including right-wing president Jair Bolsonaro, continue to belittle the virus, warning that the economic fallout from quarantine measures will be worse than the virus itself. “We lament all deaths, but it’s everyone’s destiny,” Mr Bolsonaro said in front of the presidential residence in Brasilia earlier on Tuesday.

New cases reported daily are steadily declining in Western Europe, but not in hotspots in Russia and Eastern Europe, the World Health Organisation (WHO) said.

Austria is lifting border controls imposed to limit the spread of the coronavirus with all neighbouring countries except Italy as of tomorrow, foreign minister Alexander Schallenberg told journalists in Vienna. “The pandemic numbers in

Italy don’t allow this step yet,” Schallenberg said. “This isn’t a decision against Italy. Out goal is very clearly to open the border to Italy as soon as possible.” Austria is considering whether it’s possible to allow travel to the regions that have developed better, a proposal made by the governor of the Alto Adige region, he added.

Italians were allowed to travel to other regions of the country on Wednesday for the first time in nearly three months, in a further relaxation of lockdown restrictions imposed to curb the spread of the new coronavirus. Travellers boarding trains in Milan, capital of Lombardy in northern Italy, were excited at the prospect of finally being able to visit family and friends elsewhere in the country. Lombardy remains one of the regions worst affected by the pandemic in the whole world and it accounts for about half of Italy’s more than 33,500 deaths from Covid-19, the respiratory disease caused by the virus. The now-obligatory protective masks and groups of security staff checking temperatures are constant reminders that the epidemic has still not been tamed. Social distancing rules remain in force and shops routinely limit entries. There are periodic public outcries over groups of people gathering outside bars or in parks.

A senior US army vaccine researcher said it was reasonable to expect that some sort of coronavirus vaccine could be available to part of the US population by the end of 2020. The WHO’s Americas regional director urged the United States to keep helping countries in the region fight the virus even as the Trump administration leaves the UN agency. Mexico’s deputy health minister said on Tuesday the coronavirus had reached its peak intensity in the country after the ministry reported a record rise in daily cases.

Bolivian authorities are doing door-to-door checks in regions with severe outbreaks as it looks to stem the spread of infections which have risen above 10,000.

The Chinese city of Wuhan has tested nearly all of its 11 million citizens for coronavirus in a mass effort that resulted in the isolation of 300 people, authorities said. The pandemic is believed to have originated last year in the industrial city that went under lockdown for 76 days to try to stop the outbreak. Wuhan still accounts for the bulk of China’s 83,021 cases and 4,634 deaths from the disease. The testing effort carried out in the second half of May targeted every resident not already tested and excluded only children under six. “This is extraordinarily rare anywhere in the world,” said National Health Commission expert Li Lanjuan. “It not only shows confidence and determination in the fight against the epidemic in Wuhan, but has also provided reference to other cities for their prevention.” No active, unknown cases of Covid-19 were found from the testing effort, although 300 people who tested positive for the virus without showing symptoms were placed in isolation.

The coronavirus pandemic has pushed Australia’s economy into recession for the first time in 29 years. Federal treasurer Josh Frydenberg said the current June quarter will be the second in a row in which the Australian economy has shrunk. A recession is defined as at least two successive quarters of contraction. Data released for the March quarter showed a 0.3 per cent contraction since the three months through to December due to destructive wildfires and the early stages of the coronavirus lockdown. Mr Frydenberg said the Treasury Department had advised that the June quarter result will be worse.

South Korea has reported 49 new cases of Covid-19, continuing a resurgence as millions of children return to school. The figures announced by the Korea Centres for Disease Control and Prevention brought national totals to 11,590 cases and 273 deaths. All but one of the new cases were reported from the densely populated Seoul metropolitan area, where hundreds of infections have been linked to entertainment venues, church gatherings and a massive e-commerce warehouse. Mayors and governors in the greater capital area have shut thousands of nightclubs, hostess bars, karaoke rooms, churches and wedding halls to slow the spread of the virus. But despite the spike in transmissions, the government has been pushing ahead with a phased reopening of schools, which began with high-school seniors on May 20th.

In Afghanistan, officials said that fewer than one in 10 test samples collected daily are being processed, and of those more than 30 per cent are consistently testing positive, suggesting a high and hidden number of infections.

Zimbabwean troops and police tightened the lockdown in the capital Harare, blocking many cars and buses from entering the central business district as cases increased. A South African high court declared some of the government’s lockdown regulations unconstitutional but suspended the order for 14 days, leaving the rules in place for now.

The World Bank said it expects the coronavirus and resulting recessions to leave “lasting scars” on developing and emerging market countries, with the worst damage on oil exporters and those suffering financial crises.

Bankers across the European Union could face a one-year ban on bonuses to help push through a “quick fix” package of pandemic relief measures for lenders. The amount of natural gas flowing on pipelines to US liquefied natural gas (LNG) export plants plunged to a 13-month low in June.–PA, Reuters, Bloomberg