‘We are saving our country’: Trump’s most loyal supporters turn out at Tulsa rally

Arena only half full for return rally, but most of those in attendance didn’t socially distance 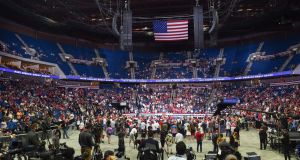 Donald Trump speaks to a half-full arena during a rally in Tulsa, Oklahoma. Photograph: Albert Halim/EPA. 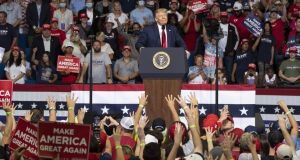 US President Donald Trump at the rally in Tulsa, Oklahoma on Saturday. Photograph: Go Nakamura/Bloomberg.

The arena may have only been half full. The queues relatively small. But Donald Trump’s return rally, held in the midst of a pandemic and against local public health advice, still drew thousands of the president’s most loyal followers.

Unperturbed by the spread of a virus that has no cure, mostly uninterested by gentle guidance to wear protective face masks, and unfazed by the complete lack of social distancing inside the BOK Center in downtown Tulsa, Oklahoma - many Trump supporters drew their faith in protection from the virus from other forces.

“When we charged the beaches in Normandy it was dangerous also,” said Christopher Miller, 50. “And right now I believe we’re trying to save our country for my children.”

Miller, who was not wearing a face mask as he walked towards the center, was accompanied by his wife and young son. Asked if he was concerned about local health officials cautioning the event could lead to unmitigated spread of the virus, which has so far claimed 119,000 lives, he said he was not. Why?

“The Lord Jesus Christ. He gives us not fear but the spirit of power and love.”

For Sherrill Sellman, a naturopathic doctor and self-described heath writer, it was faith in her own immune system and a belief that the Centers for Disease Control and Prevention had inflated the number of Covid-19 deaths in the country.

“We’re not getting the full story, so I don’t buy these statistics. And I’m educated,” she said, confirming she would not wear a mask unless it was “absolutely mandated”.

Outside the BOK center a mixture of armed militia groups, conspiracy theorists and vendors - one selling a four volume collection that was simply reprints of Donald Trump’s tweets - meant that journalists were occasionally confronted for wearing masks and other protective gear and trying to social distance.

The InfoWars host and internet troll Owen Shroyer declined to speak to the Guardian unless face masks were removed during the interview. “Enjoy your slavery,” he said, when his request was refused.

Josh Cupps, 34 years old and a member of the Bikers For Trump group, had arrived on a motorcycle with his wife, Cupid, and around 50 other members of the group. Most were armed and Cupps and his wife both displayed their holstered Glock pistols as they spoke. None had plans to go inside the arena.

“I’m here to keep the protesters at bay,” he said. “If they start destroying and raising hell, we’re going to go and stop them.”

Although counter protests remained almost entirely peaceful, on Saturday night after the president spoke a small group were pepper balled by police who also fired bean bag rounds, according to witnesses.

Large swathes of police in riot gear and armoured vehicles patrolled throughout the day. National guard troops holding long rifles were situated at perimeter lines around the arena.

Inside the half packed arena, many people queued for popcorn and hotdogs, none observing social distancing. Despite the fact the venue was nowhere near capacity, attendees still sat next to each other.

Outwardly, however, members of Trump’s inner circle had been saying on Saturday morning that they hoped attendees would socially distance and wear masks. Trump’s former lawyer, Pam Bondi, who represented the president during his impeachment trial in the senate, told the Guardian in a brief exchange at a nearby hotel.

“We hope that people are going to stay socially distanced, are going to wear a mask, [USE]hand sanitiser and be respectful of each other,” Bondi said but conceded: “It’s not a legal requirement, it’s people’s own free choice. But we hope everyone will be peaceful and happy and have a great rally and social distance.”

Less than a mile away at the John Hope Franklin Reconciliation park, the site of a memorial to the 1921 Tulsa race massacre, one of the worst episodes of racist violence in American history, a group of around 250 Black Lives Matter protesters held quiet vigil.

“The real Tulsa is right here,” said Mark Whited, a leader of the Black Lives Matter chapter of Tulsa. “Tulsa is a city of love. Tulsa is a community that comes together, a lot of us stand up for what is right.”

He pointed towards the arena: “Our event today was about nothing other than unity and inclusion. Not of separation and division over there.”